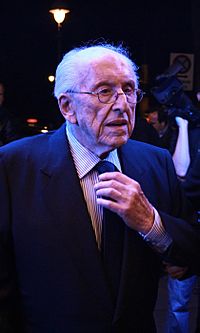 Eric Pleskow (April 24, 1924 – October 1, 2019) was an Austrian-born American movie producer. He was President of the movie studios United Artists and Orion Pictures. He was born in Vienna.

Under his presidency at United Artists, the company won the Academy Award for Best Picture three years in a row: One Flew Over the Cuckoo's Nest (1975), Rocky (1976) and Annie Hall (1977).

In 1978, Pleskow left United Artists and built up Orion Pictures, which he ran until 1992. Their greatest successes under his management were Amadeus, Dances with Wolves and The Silence of the Lambs.

From 1998 until his death, he was the President of the Vienna International Film Festival.

All content from Kiddle encyclopedia articles (including the article images and facts) can be freely used under Attribution-ShareAlike license, unless stated otherwise. Cite this article:
Eric Pleskow Facts for Kids. Kiddle Encyclopedia.