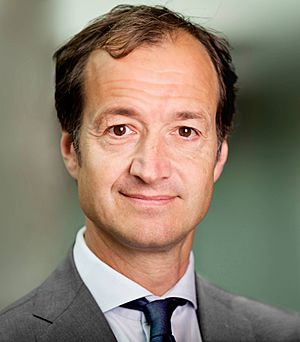 Eric Derk Wiebes (born March 12, 1963 in Delft) is a Dutch politician. He is a member of the People's Party for Freedom and Democracy (VVD).

He was minister of Economic Affairs and Climate in the Third Rutte cabinet from October 26, 2017 until January 15, 2021.

Wiebes studied mechanical engineering at Delft University of Technology, and obtained a Master of Business Administration at INSEAD.

He worked at Royal Dutch Shell, McKinsey & Company, OC&C Strategy Consultants, and at the Ministry of Economic Affairs.

All content from Kiddle encyclopedia articles (including the article images and facts) can be freely used under Attribution-ShareAlike license, unless stated otherwise. Cite this article:
Eric Wiebes Facts for Kids. Kiddle Encyclopedia.