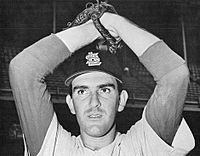 Ernest Gilbert Broglio ( August 27, 1935 – July 16, 2019) was an American professional baseball pitcher. He played for the St. Louis Cardinals and Chicago Cubs of Major League Baseball from 1959 to 1966. He was born in Berkeley, California. Broglio was best known as the "other player" in the controversial trade that sent future Baseball Hall of Fame outfielder Lou Brock from the Cubs to the Cardinals in June 1964.

All content from Kiddle encyclopedia articles (including the article images and facts) can be freely used under Attribution-ShareAlike license, unless stated otherwise. Cite this article:
Ernie Broglio Facts for Kids. Kiddle Encyclopedia.