Erwin Panofsky (March 30, 1892 in Hannover – March 14, 1968 in Princeton, New Jersey) was a German-Jewish art historian, whose academic career was pursued mostly in the U.S. after the rise of the Nazi regime.

Panofsky's work represents a high point in the modern academic study of iconography, which he used in hugely influential works like his "little book" Renaissance and Renascences in Western Art and his masterpiece, Early Netherlandish Painting.

Many of his works are still in print. Panofsky's ideas were also highly influential in intellectual history in general, particularly in his use of historical ideas to interpret artworks and vice versa. 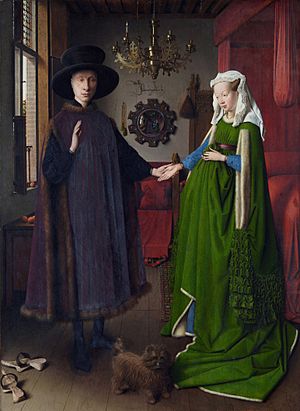 Panofsky made important contributions to the study of iconography, including his interpretation of Jan van Eyck's Arnolfini Portrait (1434, pictured).

All content from Kiddle encyclopedia articles (including the article images and facts) can be freely used under Attribution-ShareAlike license, unless stated otherwise. Cite this article:
Erwin Panofsky Facts for Kids. Kiddle Encyclopedia.