Eucalyptus albens, known as the white box, is a common tree of the western slopes and plains of New South Wales and adjacent areas in Queensland and Victoria. It has rough, fibrous bark on the base of its trunk and smooth, white bark above. The leaves are lance-shaped and groups of seven spindle-shaped flower buds are arranged in leaf axils or on the ends of the branches. White flowers are mostly present between August and February and the fruit are barrel-shaped to urn-shaped. 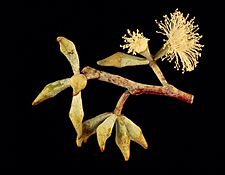 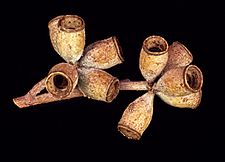 Eucalyptus albens was first formally described in 1867 George Bentham from material collected in several locations, including by botanist and explorer, Allan Cunningham, along the "Macquarrie river". It is related to grey box (E. moluccana) and inland grey box (E. microcarpa). Hybridization with grey box has been reported in the Hunter Valley. The specific epithet (albens) is a Latin word meaning "whitening". Both the epithet and common names are derived from the white deposits over the leaves and gumnuts, while the epithet "box" comes from the box-like tesselated pattern in the bark.

The white box is a tree of grassy eucalypt woodlands on plains or gently sloping areas from south-east Queensland to the western slopes of New South Wales and north-eastern Victoria extending as far south as Yea. Isolated populations occur in the Flinders Ranges and near Melrose South Australia.

Eucalyptus albens is a component of the "WhiteBox Yellow Box Blakelys' Red Gum Woodland" commonly referred to as "Box-Gum Woodland" that is classed as "critically endangered" under the Australian Government Environment Protection and Biodiversity Conservation Act 1999 and as an "endangered ecological community" under the New South Wales Government Biodiversity Conservation Act 2016.

The heavy and hard wood is used for railway sleepers and fence posts. The flowers produce nectar for the honey industry.

All content from Kiddle encyclopedia articles (including the article images and facts) can be freely used under Attribution-ShareAlike license, unless stated otherwise. Cite this article:
Eucalyptus albens Facts for Kids. Kiddle Encyclopedia.