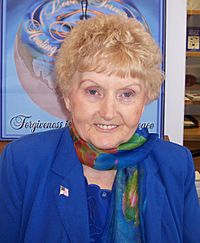 Eva Mozes Kor (January 31, 1934 – July 4, 2019) was a Romanian-American writer and activist. She was a survivor of the Holocaust. Along with her twin sister Miriam, Kor was experimented by Josef Mengele at the Auschwitz during World War II. She lost both of her parents and two older sisters to the Holocaust. She was born in Porț, Romania.

Kor lived in Terre Haute, Indiana. She founded CANDLES Holocaust Museum and Education Center, which teaches children about the Holocaust. Kor died in Krakow, Poland while on an educational trip to Auschwitz on July 4, 2019 at the age of 85.

All content from Kiddle encyclopedia articles (including the article images and facts) can be freely used under Attribution-ShareAlike license, unless stated otherwise. Cite this article:
Eva Mozes Kor Facts for Kids. Kiddle Encyclopedia.