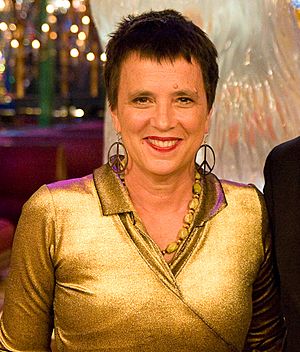 Eve Ensler (born 25 May 1953) is an American playwright and feminist activist.

Ensler was born in New York City to a Christian mother and Jewish father. She graduated from Middlebury College in 1975. She married Richard McDermott in 1978 and divorced in 1988. She is the adoptive mother of actor Dylan McDermott. She adopted him when he was 18 and she was 26.

In 2010, she said that she was being treated for uterine cancer.

All content from Kiddle encyclopedia articles (including the article images and facts) can be freely used under Attribution-ShareAlike license, unless stated otherwise. Cite this article:
Eve Ensler Facts for Kids. Kiddle Encyclopedia.