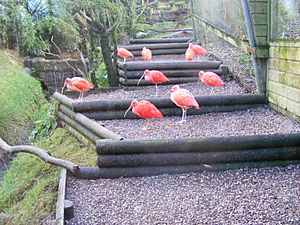 Scarlet ibises at the Exmoor Zoo

Exmoor Zoo is a conservation centre in Exmoor, North Devon, England. The zoo developed from Exmoor Bird Gardens, opened on the site of a farm in 1982. The current owners took over in 1993, and have enlarged and developed the zoo, now specialising in the conservation of smaller animals. The zoo has been a member of BIAZA, the British and Irish Association of Zoos and Aquariums, since 1995 and recently became a member of EAZA (European Association of Zoos and Aquariums) in 2018.

Exmoor Bird Gardens opened on the site of a 7-acre (2.8 ha) farm in 1982, expanding to 12 acres (4.9 ha) in 1985. Financial difficulties led to a change of ownership in 1993, and the new (and still current) owners started refurbishing the run-down bird gardens, also adding a number of animal species to the attractions. The 1995 name change to Exmoor Animal & Bird Gardens coincided with the joining of BIAZA. A further name change, to "Exmoor Zoological Park", took place in 1997, although this has since been shortened to just "Exmoor Zoo". Since then the zoo has expanded and developed further, and the focus has started shifting towards exhibiting larger animals than previously. 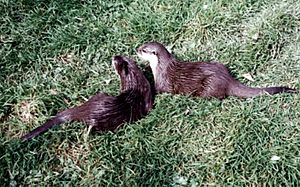 Among the larger residents are cheetahs, maned wolves, tapirs and bat-eared foxes. The zoo is home to one of the largest collections of ibis and also includes howler monkeys, gibbons and a significant number of species of smaller carnivores.

One of the zoo's feature attractions, the new enclosure for the "Exmoor Beast", was completed in January 2007 when Ebony arrived. She is a melanistic ('dark-coloured' or 'black') leopard thought to be one of only two in the British Isles available for breeding. The zoo received a male black leopard as a potential mate for Ebony in December 2009. Zoysa came from Linton Zoo, Cambridgeshire, on breeding loan.

Other mammals include reindeer, lemurs, porcupines, and meerkats.

There is a large lake, home to pelicans, waterfowl and terrapins.

The zoo participates in international, European and national animal breeding programmes, and cooperates with other zoos around the world to exchange animals to ensure their survival.

The zoo was noted for its conservation work with tamarins and marmosets but more recently long-nosed potoroo & smaller carnivores.

Thieves targeted the zoo in March 2006, stealing a number of endangered species. The entire colony of eleven black-tufted marmosets were stolen, the only breeding colony in Britain, wrecking 13 years of the zoo's attempts to protect the highly endangered animals. The thieves' haul also included a pair of white-fronted marmosets, a pair of cockatoos and a pair of amazon parrots. It is believed that the animals were stolen 'to order'. Two of the marmosets have since been recovered.

In September 2006 the zoo acquired a pair of howler monkeys, called Greeb and Wing, to act as a 'burglar alarm'. This move was prompted by the theft of the marmosets earlier in the year. The zookeepers are hoping that the noisy monkeys will be enough to scare off intruders.

In June 2006 a family of blackbirds nested in an artificial tree in the education centre, drawing attention from families visiting the zoo. A pair of albino skunks were born at the zoo in 2012.

All content from Kiddle encyclopedia articles (including the article images and facts) can be freely used under Attribution-ShareAlike license, unless stated otherwise. Cite this article:
Exmoor Zoo Facts for Kids. Kiddle Encyclopedia.