Fairfield Showground is a multi-purpose indoor-outdoor venue situated in Prairiewood, New South Wales, Australia. Since in the 1970s, it has been a popular venue for multicultural festivals, horse racing, carnivals, markets and club meets attracting as many as 20,000 people. Situated in western Sydney, the showground has around 10,000 sqm of undercover exhibition space and it is overall 33 hectares (79 acres) in size, with parking spaces for over 600 vehicles.

One of the largest festival precinct in Greater Western Sydney, the showground was developed in the 1950s and is surrounded by eucalyptus bushland, with Orphan School Creek meandering on the north. 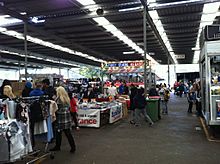 Markets are held at Fairfield Showground every Saturday from 9am to 4pm in the sheltered area behind the grandstands and would have thousands of visitors each week. The markets are popular in the region, with more than 600 stalls and have free entry. The markets mainly consist of toy stores, food booths, dollar stores, sporting gear shops, grocery, hardware, gardening, jewelry, and a few pet stores. Products are sold firsthand.

Entertainment is also provided for children, where they include pony rides, merry-go-round, clown heads, a jumping castle, and a mini-train ride system which circulates the bushy surroundings (adults are also admitted on the ride).

A flea market, a type of bazaar, was launched in November 2016, and it attracts hundreds of people, running every Wednesdays. Aussie Night Markets are held every Tuesday each month at 5pm, which feature international cuisines, such as Turkish, Korean, Chinese and Mexican with over 40 multicultural street foods and dessert vendors, 20 craft stores, DJ performances, and also a boutique retail section.

The adjacent Parklands Function Centre is used for engagement parties, wedding receptions, anniversaries, school reunions and award presentation nights for up to 250 people. There is also an 18-hole public golf course, a driving range and a harness racing track with its own covered grandstand. The redevelopment of the Fairfield Showground in western Sydney is moving forward with its new multipurpose amenities building now open and construction set to start on a new $10 million grandstand. Fairfield City Council officially opened the Showground’s multipurpose amenities building last month, providing modern sporting facilities and a community hub for local events. A whole range of community members including sportspeople, performers and Showground visitors now have access to high quality change rooms, training, meeting and food preparation areas in the new building. The $5.1 million building was funded through the Western Sydney City Deal’s Western Parkland City Liveability Program, a joint commitment by the Fairfield Council, the NSW Government, and the Federal Government. The latest phase in the $28 million redevelopment of the Showground, the amenities building is placed between the festival, cricket and AFL arena, the FIFA-accredited synthetic field and the elite turf field.

The showground is also home to the Australia's first, largest and longest-running Eid Festival, which commenced in 1987. The festival has grown to now cater for tens of thousands of Muslims and non-Muslims and has included as guests Yusuf Islam, famous Australian footballer, Hazem El Masri, the then Governor-General of Australia, Michael Jeffery and the previous Premier of New South Wales, Kristina Keneally.

The Chinese New Year is annually celebrated in the showground with over 60,000 people attending. More than 40,000 people attend the annual Vietnamese New Year, which is held for three days from Friday to Sunday. Both feature fireworks, amusement rides and cultural performances such as dragon dancing.

The Fairfield Easter Fair will be held annually in the showground for three days starting from 2018 to cater those in the area, which are distant from the Sydney Royal Easter Show in Sydney Olympic Park. With a free admission, it will open on Easter from 10am to 10pm, Friday to Sunday, and it will feature over 20 amusement rides (such as Bumper cars), blacksmith exhibition, farm animals, easter egg hunt, sheep shearing, reptile shows and fireworks, among many things. A Uruguayan festival, which has been running for nearly three decades and raised $2 million of charity, features hundreds of performers and live music acts, is held annually on August and it's one of the biggest outdoor Latin festivals in Sydney's West.

Furthermore, international artists such as AC/DC have performed in the venue in 1975, playing songs from their debut album High Voltage.

Harness racing on the site's tracks.

Proposed sites of the precinct revealed in 2016 and 2017 included an international size football field (which can be used for AFL), coaching clinics, another pavilion building, extra parking spaces, community gardens, an international-sized stadium (with a capacity of about 10,000 to cater south-western Sydney and costing $8.5 million), walking and cycling tracks in the bush surrounds, and an all-weather synthetic field. Frank Carbone, mayor of Fairfield LGA, stated “The redevelopment will allow us to bring some of the biggest festivals and events to southwest Sydney, as well as major sporting events.”

Councillors supported a call by Cr Carbone for staff to develop a plan that aims to turn the site into a “premier location which brings the community together for celebration, shopping, and sporting excellence”. Carbone concluded that it would be developed into an important place for people outside of the area with the possibility of it to grow into an international facility. An outdoor cinema was planned in March 2017, which would accommodate up to 10,000 people and be an ideal spot for film premieres.

Fairfield City Council will make its sporting facilities gettable for any bid for Sydney to host the Commonwealth Games. Frank Carbone has said Fairfield Showground should be included in any Games proposal saying, “We are looking at investing almost $10 million into the showground, and also seeking more funding for further upgrades”. The instance to host the 2026 or 2030 Games in greater western Sydney was put to Premier Gladys Berejiklian and Sports Minister Stuart Ayres.

The Liverpool-Parramatta Rapid Bus Transitway has a station close to the showground, as well as a number of encircling bus stops that belong to Transit Systems Sydney. Although the main entry is from Smithfield Road, there is another entrance to the showground from Moonlight Road, on the head of Greenfield Road, to the west, which feature a sign indicating the showground's entry.

All content from Kiddle encyclopedia articles (including the article images and facts) can be freely used under Attribution-ShareAlike license, unless stated otherwise. Cite this article:
Fairfield Showground Facts for Kids. Kiddle Encyclopedia.