Falconer is a village in Chautauqua County, New York, United States. The population was 2,420 at the 2010 census. Falconer is within the town of Ellicott and is on the eastern edge of the city of Jamestown.

The town was originally called Worksburg, after Edward Work, who purchased the land from the Holland Land Company in August 1807. The first Falconer to own the land was Robert Falconer, who bought it from Edward Work in 1836. His son, Patrick, later consolidated his land holdings in the future village. In 1874 the community received its present name, after either William T. Falconer (1850–1915) or his father Patrick, who was on the Board of Directors of the Allegheny & Pittsburg Railroad and donated a large tract of land through town to the railroad concern. This resulted in the railroad line being routed through the middle of the community. Route 380 in the village retains the name "Work Street" after the town's founder (it also now serves as a double entendre as the village's various industrial sites are on the same road and thus many people "work" there).

The village of Falconer was incorporated in 1891.

John Cheever selected the village as the location for the fictional Falconer State Prison in his novel Falconer.

The Chadakoin River, the outlet of Chautauqua Lake, flows from Jamestown and passes through the village, meeting Cassadaga Creek to the northeast at Levant. The river system is part of the Mississippi River basin via Conewango Creek and the Allegheny River.

According to the United States Census Bureau, the village has a total area of 2.8 square kilometres (1.1 sq mi), all of it land.

New York State Route 394 (east-to-west) and Chautauqua County Route 380 (north-to-south) are the primary routes through Falconer. Access to and from Interstate 86 is available via exit 14 just east of the village. County Route 65 enters the village from the southeast. Falconer is unusual among villages in the area in that its speed limit is 25 miles per hour, the lowest of any village or town in Chautauqua County. 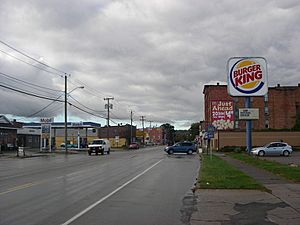 There were 1,109 households out of which 29.4% had children under the age of 18 living with them, 46.5% were married couples living together, 11.7% had a female householder with no husband present, and 37.0% were non-families. 31.5% of all households were made up of individuals and 15.5% had someone living alone who was 65 years of age or older. The average household size was 2.29 and the average family size was 2.88.

All content from Kiddle encyclopedia articles (including the article images and facts) can be freely used under Attribution-ShareAlike license, unless stated otherwise. Cite this article:
Falconer, New York Facts for Kids. Kiddle Encyclopedia.