From 1899 to 1914, Farallón de Pájaros was controlled by the German Empire and was administered as part of the colony of German New Guinea. In 1903 the island was leased to a Japanese company, which hunted birds whose feathers were exported to Japan and then to Paris.

In 1985, per the Constitution of the Commonwealth of the Northern Mariana Islands, the island was designated as a wilderness area for the protection and conservation of natural resources. Since 2009, the island has been part of Marianas Trench Marine National Monument of the United States. 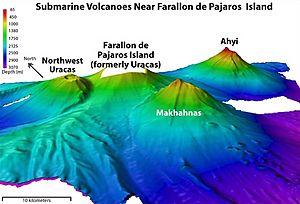 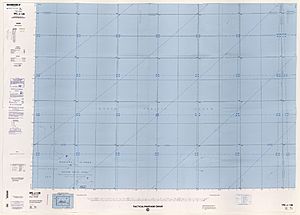 Farallón de Pájaros is the northernmost island of the Marianas chain. It is located 65 kilometers (40 mi) northwest of the Maug Islands and 591 km (367 mi) north of Saipan, the main island of the Northern Mariana Islands. Its northern neighbor is South Iwo Jima of the Ogasawara Islands of Japan, located 541 km (336 mi) away.

Between 1864 and 1953, 15 volcanic eruptions of Farallón de Pájaros have been recorded.

The island has been recognised as an Important Bird Area (IBA) by BirdLife International because it supports populations of Micronesian megapodes and sooty terns.

All content from Kiddle encyclopedia articles (including the article images and facts) can be freely used under Attribution-ShareAlike license, unless stated otherwise. Cite this article:
Farallon de Pajaros Facts for Kids. Kiddle Encyclopedia.