Maug (from the Chamorro name for the islands, Ma'ok, meaning "steadfast" or "everlasting") consists of a group of three small uninhabited islands. This island group is part of the Northern Islands Municipality of the Northern Mariana Islands chain in the Pacific Ocean. 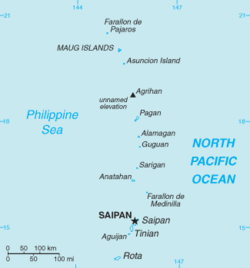 The islands are overgrown with savannah grass. On East Island are Pandanus trees and coconut palms (Cocos nucifera), near the former settlement.

The islands have been recognised as an Important Bird Area (IBA) by BirdLife International because they support populations of Micronesian megapodes, red-tailed tropicbirds, brown noddies, Micronesian myzomelas and Micronesian starlings.

From a European perspective, the Maug Islands were discovered on 22 August 1522 by Gonzalo Gómez de Espinosa, who named it Las Monjas (The Nuns in Spanish). Gómez de Espinosa was a member of Ferdinand Magellan‘s attempted circumnavigation of the globe, and after Magellan’s death unsuccessfully attempted to navigate the ship Trinidad across the Pacific Ocean to Mexico. Gomez de Espinosa found the largest island of the Maug Islands settled by Chamorros, who called the island Mao or Pamo. Gómez de Espinosa freed the Chamorro whom he had kidnapped on Agrihan and three of his crewmen deserted the Trinidad on the island. Two of the deserters were killed by the Chamorros, but the third, Gonzalo Alvarez de Vigo, later came to Guam. In 1669, the Spanish missionary Diego Luis de San Vitores visited the Maug Islands and named it San Lorenzo (St. Lawrence). In 1695, all of the inhabitants were forcibly deported to Saipan, and three years later, to Guam. Since that time, the islands have been uninhabited.

Following the sale of the Northern Marianas by Spain to the German Empire in 1899, the Maug islands were administered as part of German New Guinea. In 1903, the island was leased to a Japanese company, who hunted birds for feathers for export to Japan, and from there to Paris.

During World War I, the Maug Islands came under the control of the Empire of Japan and were subsequently administered as part of the South Seas Mandate. The Japanese established a weather station on the islands, and a fish processing plant. During World War II, the German auxiliary cruiser Orion rendezvoused with supply ships in January–February 1941 at the caldera of the Maug Islands.

In 1985, per the Constitution of the Commonwealth of the Northern Mariana Islands, the islands were designated as a wilderness area for the protection and conservation of natural resources. Since 2009, the submerged lands and waters around the island have been part of Marianas Trench Marine National Monument of the United States.

All content from Kiddle encyclopedia articles (including the article images and facts) can be freely used under Attribution-ShareAlike license, unless stated otherwise. Cite this article:
Maug Islands Facts for Kids. Kiddle Encyclopedia.