The Fazl Mosque (English: The Grace Mosque) also known as The London Mosque, is the first purpose-built mosque in London, England. It was opened on 23 October 1926 in Southfields, Wandsworth. At a cost of £6,223, the construction of the mosque and the purchase of the land on which it stands, was financed by the donations of Ahmadi Muslim women in Qadian, Punjab, British India, with support from the British Muslim convert Khalid Sheldrake. Between 1984 and 2019 the Fazl Mosque was the residence of the caliphs of the Ahmadiyya Muslim Community, and therefore its de facto international headquarters. The administrative headquarters now lies at the site of the Islamabad, Tilford. 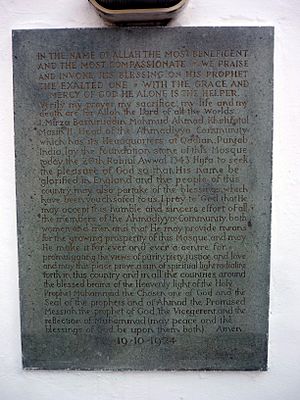 The design of the mosque is credited to Thomas Mawson. The plans form part of the Mawson archive held by the Cumbria Archive Service. The foundation stone was laid in 1924 by Mirza Bashir-ud-Din Mahmud Ahmad, the second Caliph, who was visiting London as the representative of Islam at The Conference of Living Religions that was being held at the Imperial Institute in South Kensington. The foundation ceremony was attended by 200 guests. The construction of the mosque started in September 1925 and ten months later the work was completed. It was named the Fazal Mosque by the Caliph (Fazal meaning Grace). Khan Bahadur Sheikh Adbul Qadir, ex-Minister of Punjab Legislative Council, formally opened the Mosque in October 1926. Six hundred distinguished guests who were representing numerous countries, as well as local MPs and other dignitaries attended the ceremony and the function was well reported in the press.

The mosque accommodates 150 worshippers and is also known colloquially among Ahmadi Muslims as the London Mosque. Its first Imam was Maulana Abdur-Rahim Dard, and since 1926 The London Mosque has had eleven Imams; the current being Maulana Ataul Mujeeb Rashed who has been serving as its Imam since 1983. 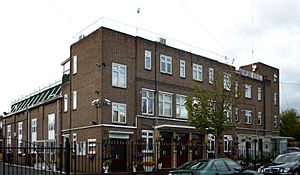 The Caliph's residence: an apartment above the office block beside the Mosque

In 1984, Ordinance XX was promulgated by the Government of Pakistan which prohibited Ahmadi Muslims from any public expression of the Islamic faith, rendering the caliph unable to perform his duties as the leader of the community. Due to these circumstances, Mirza Tahir Ahmad, the 4th Caliph, left Pakistan and migrated to London, provisionally moving the Ahmadiyya headquarters from Rabwah, Pakistan to the Fazl Mosque in London.

Within the mosque complex, a separate building consisting of a hall, offices, and a small apartment on the uppermost floor for the Imam of the mosque was built beside the mosque earlier in 1967. Upon his migration, this apartment became the home of the caliph and following his death in 2003, the home of Mirza Masroor Ahmad, the 5th and current caliph. It remains the permanent residence of the caliph as of 2016. The mosque and its surrounding buildings have therefore become the international headquarters of the movement since 1984.

In addition to the regular flow of MPs, Mayors, Councillors, scholars and students, The London Mosque has been host to a number of distinguished visitors from far and wide. The founder of Pakistan, Muhammad Ali Jinnah, visited the mosque on several occasions and made his famous speech in its grounds when he decided to return to India to represent the Muslims in the sub-continent. The Crown Prince of Saudi Arabia, Faisal Bin Adbul-Aziz also visited the mosque in 1935 as did his predecessor, King Saud.

Sir Chaudhry Muhammad Zafrullah Khan - the first Foreign Minister of Pakistan, a President of the International Court of Justice and President of the UN General Assembly - lived at the premises for many years. In July 2011, Prince Edward, Earl of Wessex of the United Kingdom also visited the mosque in his capacity as a Patron of ‘The London Gardens Society’ and thus took the opportunity to inspect the gardens of the Fazl Mosque, which have won numerous awards over the past few years. The Earl was also able to view a small exhibition about the history of the mosque.

In 1955, the second Caliph of the Ahmadiyya movement returned to the mosque when he visited Europe for further medical treatment following an attack on his person back in Rabwah, Pakistan. In London, he also held a conference of all missionaries stationed in Europe. The third Caliph also visited the mosque many times.

As the range and frequency of activities in the mosque progressively increased there was need for more space. This increase saw the construction of the multi-purpose Mahmood Hall, as well as the Nusrat Hall, in the grounds of the mosque. From Sunday school classes and school visits, to Question and Answer sessions and international meetings, The London Mosque has been and continues to be a hive of activity promoting education and religious awareness.

From the premises of the mosque, the 4th Caliph was also able to launch the community's satellite TV channel Muslim Television Ahmadiyya International (MTA) in 1994 through which he could transmit televised messages globally to the community and have his sermons heard throughout the world.

With the expansion of The Ahmadiyya Muslim Community, the capacity of The London Mosque has become insufficient and further premises in Surrey and Morden were acquired for the Baitul Futuh mosque. However, the historic significance and role of The London Mosque continues to ensure its special and indeed unique position for both the global Ahmadiyya Muslim Community as well as Britain.

All content from Kiddle encyclopedia articles (including the article images and facts) can be freely used under Attribution-ShareAlike license, unless stated otherwise. Cite this article:
Fazl Mosque, London Facts for Kids. Kiddle Encyclopedia.