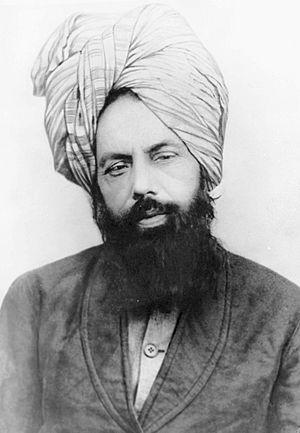 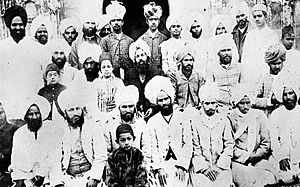 Mirza Ghulam Ahmad (seated centre) with some of his companions at Qadian c.1899 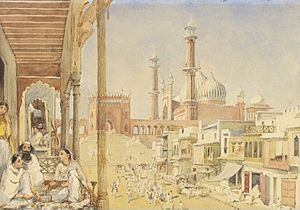 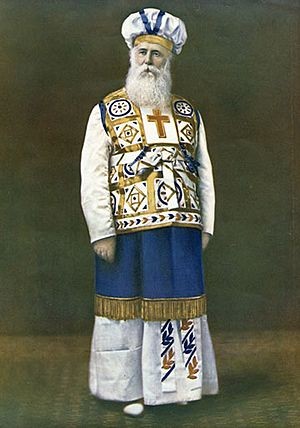 Alexander Dowie in his robes as "Elijah the restorer"

Ghulam was born in Qadian, Punjab in India in 1835 the surviving child of twins born to an rich family. He is reported to have spent a lot of time in the mosque and with the study of the Qur'an and his religion, Islam. This did not lead him to fulfill his father's wishes of his son becoming a lawyer or civil servant. He did attempt to become a lawyer, but failed the test. In his course of studying religious topics, he would often interact with many Muslims, non-Muslims, and with Christian missionaries whom he would engage in debates.

Prior to His Claim

When Ghulam was thirty five years old his father died. At this time Ghulam claimed that God had begun communicating with him, often through direct revelation. Initially, Ghulam's writings from this time were intended to counter what he perceived to be anti-Islamic writings originating from various Christian missionary groups. He also focused on countering the effects of various groups such as the Brahmo Samaj. During this period of his life he was well received by the Islamic clerics of the time.

As time progressed, his writings began to exhibit his claims of being the mujaddid or reformer of his era. These writings were compiled in one of his most well-known works: Barahin Ahmadiyya, a work consisting of 5 volumes while originally planned 50 volumes and collected advance money from people. He explained that since there is only a dot difference between 50 & 5, therefore his promise was fulfilled. In later volumes, he would essentially claim to be the messiah of Islam. This proved and continues to be very controversial, as traditional Islamic thought holds that Jesus is the Messiah, who himself will return in the flesh at the end of times. Ghulam countered this by claiming that Jesus was dead, and had in fact escaped crucifixion and died in India. According to ghulam, the promised Mahdi was a spiritual, not military leader as is believed by most Muslims. With this proclamation, he also began to step away from the traditional idea of militant Jihad, and redefined it as a “spiritual” battle rather than a physical one. In addition to these controversial claims, he would later claim that Guru Nanak, the first Sikh Guru, was in fact a Muslim.

These writings began to turn the general Muslims ulema (religious clerics) against him, and he was often branded as a heretic. Some accused Ghulam of working for the British who were trying to use him to remove the concept of Jihad from Indian Muslims.

Ghulam founded the Ahmadiyya movement 1889. He claimed that the Ahmadiyya Movement stood in the same relation to Islam, as Christianity stood to Judaism at the time of Jesus. The mission of the movement according to Ghulam was the prorogation of what he considered to be Islam in its pristine form. Mirza Ghulam's teachings which differed from other Muslims of the time can be summarized as following:

Mirza Ghulam is widely acknowledged to have devoted his life to furthering the cause of his movement and countering allegations of heresy against his person till his death at Lahore in 1908.

The Ahmadiyya movement in Islam was founded in 1889, but the name Ahmadiyya was not adopted until about a decade later. In a manifesto dated November 4, 1900, the founder explained that the name referred to Ahmad, the alternative name of the prophet Mohammed. According to him, ‘Mohammed’, which means ‘the praised one’, refers to the glorious destiny of the prophet who adopted the name from about the time of the Hegira; but ‘Ahmad’ stands for the beauty of his sermons, and for the peace that he was destined to establish in the world through his teachings. According to Mirza Ghulam Ahmad, these names thus refer to two aspects of Islam, and in later times it was the latter aspect that commanded greater attention. In keeping with this, he believed, his object was to establish peace in the world through the spiritual teachings of Islam. He believed that his message had special relevance for the Western world which according to him had descended into materialism.

One of the main source of dispute during his lifetime and continuing since then, is Mirza Ghulam Ahmad's use of the terms “Nabi” (prophet) and “Rasool” (messenger) when referring to himself. Muslims consider the prophet Muhammad to be the last of the prophets and believe that Mirza Ghulam Ahmad's use of these terms is a violation of the concept of “finality of prophet hood”. His followers fall into two camps in this regards, the Ahmadiyya Muslim Community who believe in a literal interpretation of Mirza Ghulam Ahmad's prophet hood (with some qualifications), and the Lahore Ahmadiyya Movement who believe in an allegorical interpretation of these two terms. This among other reasons caused a split in the movement soon after Ahmad's death.

Followers of Mirza Ghulam Ahmad have faced relentless persecution of various types over the years. In 1974, the Pakistani parliament amended the Pakistani constitution to declare Ahmadi Muslims as non-Muslims for purposes of the constitution of the Islamic Republic. In 1984, a series of changes in the Pakistan Penal Code sections relating to blasphemy that, in essence, made it illegal for Ahmadis to preach their religion openly as Islam, leading to 1000s of arrests and prosecutions.

All content from Kiddle encyclopedia articles (including the article images and facts) can be freely used under Attribution-ShareAlike license, unless stated otherwise. Cite this article:
Mirza Ghulam Ahmad Facts for Kids. Kiddle Encyclopedia.