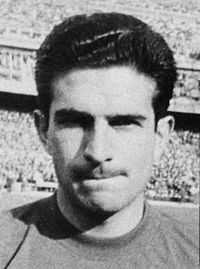 Feliciano Muñoz Rivilla (21 August 1936 – 6 November 2017) was a Spanish footballer who played as a defender. He was born in Ávila, Spain.

Rivilla made 26 appearances for the Spain national football team, and was in the team for the 1962 FIFA World Cup, the 1964 European Football Championship (where Spain won the title), and the 1966 FIFA World Cup.

All content from Kiddle encyclopedia articles (including the article images and facts) can be freely used under Attribution-ShareAlike license, unless stated otherwise. Cite this article:
Feliciano Rivilla Facts for Kids. Kiddle Encyclopedia.