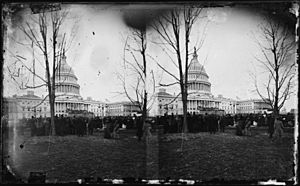 This inauguration was the first that both living parents of the president attended.

Chief Justice Salmon P. Chase administered the oath of office. Andrew Johnson did not attend the inaugural ceremonies, as President-elect Grant refused to sit with him in the carriage going to it. Instead, he was in the White House signing last-minute legislation.

All content from Kiddle encyclopedia articles (including the article images and facts) can be freely used under Attribution-ShareAlike license, unless stated otherwise. Cite this article:
First inauguration of Ulysses S. Grant Facts for Kids. Kiddle Encyclopedia.