Flamenco Beach is a public beach on the Caribbean island of Culebra. It is known for its shallow turquoise waters, white sand, swimming areas, and diving sites. It stretches for a mile around a sheltered, horseshoe-shaped bay. Playa Flamenco is a popular beach destination for both Culebra and Puerto Rico. In March 2014, Flamenco beach was ranked 3rd best beach in the world with a TripAdvisor Travelers' Choice Award. In August 2016, it was announced that Flamenco Beach had regained its Blue Flag Beach international distinction.

Flamenco is located on the northern shore of Culebra. The beach lies on a half-mile-wide, horseshoe strip of coast. The beach is bordered by the Culebra National Wildlife Refuge, which is of itself one of the oldest wildlife preserves in the United States. Off the coast of Flamenco, approximately a quarter-mile, is a reef where the surf breaks. Characteristic of Flamenco is the beach's white sand and shallow clear waters.

The waters off Flamenco beach are home to species of parrot fish, blue tang, multiple species of wrasse and other Caribbean sea fish species. Crustacean species such as Ghost Crab are also observed. Some 50,000 seabirds visit Culebra’s Flamenco Peninsula each summer to nest—mostly sooty terns and other migratory species. Summer visitors to Flamenco Beach are familiar with them as they often feed in the area in large numbers. By September, the birds have gathered up their broods and flown out to sea only to return home the following summer. Occasionally, leatherback and hawksbill sea turtles may be seen as the beaches of the Culebra archipelago are also a major breeding ground for them and the adjacent sea grass beds provide shelter and food for green sea turtles. 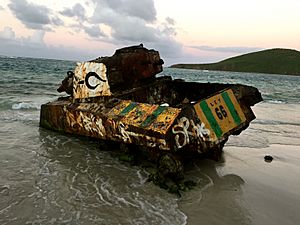 One of the most distinctive views of the beach include two rusting carcasses of old Sherman Tanks that were left behind by United States Navy in 1975 when they left after using it as weapons testing ground for more than 30 years. While the salty sea winds worked on the metal, causing it to rust and crumble, the locals got to work on decorating them, covering the abandoned hulks in layers of graffiti. Today the tanks remain and have become a unique feature of the otherwise pristine beach. New pieces of graffiti are continually added atop the old, giving the old war machines an almost cheerful new life.

Flamenco Beach is the top ranked beach in Puerto Rico and one of the top beaches in the world. The beach has available lifeguard towers, kiosks selling food, beach accessories, and easy access from the town of Dewey(where the ferry boat arrives).

World ranking through the years

There are two main ways to get to Culebra Island: by airplane or by ferry. Airplanes depart from Luis Muñoz Marin International Airport (SJU) and arrive at Culebra´s airport. From there take a taxi to Flamenco Beach. By ferry, you have to arrive at Fajardo and from there take the ferry to Culebra. The ferry route takes around 50 minutes. Once you arrive at Culebra´s port you take a taxi to Flamenco Beach.

The beach has bathroom facilities, showers, and bathrooms. There are about a half-dozen kiosks selling local food. This include Piña colada, mango smoothies, rice-and-beans burritos and all manner of seafood, from conch salad to fish skewers. Flamenco Beach has a designated camping area for a fee which provides potable water, bathrooms and shower facilities.

As stated, Flamenco Beach is a popular tourist destination among mainland Puerto Ricans and Americans and has been considered by Discovery Channel to be the second-most beautiful beach in the world.

All content from Kiddle encyclopedia articles (including the article images and facts) can be freely used under Attribution-ShareAlike license, unless stated otherwise. Cite this article:
Flamenco Beach Facts for Kids. Kiddle Encyclopedia.