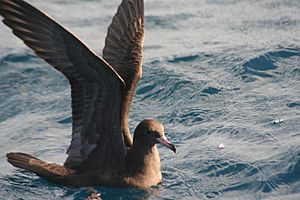 The flesh-footed shearwater (Ardenna carneipes; formerly Puffinus carneipes) is a medium-sized shearwater. Its plumage is black. It has pale pinkish feet, and a pale bill with a distinct black tip. Together with the equally light-billed pink-footed shearwater, it forms the Hemipuffinus group, a superspecies which may or may not have an Atlantic relative in the great shearwater. These are large shearwaters which are among those that have been separated in the genus Ardenna.

It breeds in colonies, and has two main breeding areas: one in the southwest Pacific Ocean includes Lord Howe Island (16,900 pairs ), South Australia (~1,800 pairs breeding on two islands ), and northern New Zealand (13,000 pairs ); the other population comprises no more than 36,000 pairs breeding on 42 islands along the coast of Western Australia from Cape Leeuwin to the Recherche Archipelago. Another 500 pairs breed on St Paul Island in the Indian Ocean. There is an unconfirmed record of birds on Astola Island of Pakistan in the Arabian Sea. There is recent evidence to suggest populations are declining across much of the species range. The species was recently listed as 'Near Threatened' in Australia and 'Nationally Vulnerable' in New Zealand and has been recommended for listing under the Agreement on the Conservation of Albatrosses and Petrels. At the state level, the species is listed as Vulnerable in WA and NSW and Rare in SA.

The species occurs as a (Boreal) summer visitor in the North Pacific Ocean where potentially large numbers are taken as bycatch in fisheries. The species also suffers from climate related impacts and significant heavy metal contamination, the cause of which is not fully understood but is likely due to the ingestion of significant quantities of plastic which the birds mistake for food floating on the ocean surface.

The Flesh-footed Shearwater, Puffinus carneipes, is a small shearwater. Its plumage is black. It has pale pinkish feet, and a pale bill with a black tip.

All content from Kiddle encyclopedia articles (including the article images and facts) can be freely used under Attribution-ShareAlike license, unless stated otherwise. Cite this article:
Flesh-footed Shearwater Facts for Kids. Kiddle Encyclopedia.