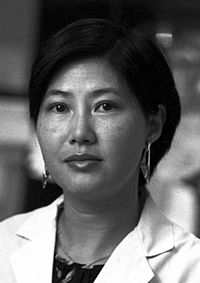 She was the first scientist to clone HIV and discovered the function of its genes, which was a major step in proving that HIV is the cause of AIDS. From 1990 to 2002, she held the Florence Riford Chair in AIDS Research at the University of California, San Diego (UCSD). She was co-founder and, after retiring from UCSD, she became the Chief Scientific Officer of Immusol, which was renamed iTherX Pharmaceuticals in 2007.

Wong-Staal died on July 8, 2020 in La Jolla, California from pneumonia-related problems at the age of 72.

All content from Kiddle encyclopedia articles (including the article images and facts) can be freely used under Attribution-ShareAlike license, unless stated otherwise. Cite this article:
Flossie Wong-Staal Facts for Kids. Kiddle Encyclopedia.