Forest Heights is a town in Prince George's County, Maryland, United States, and is part of the larger postal designation of Oxon Hill. The town straddles both sides of dual-lane Maryland Route 210 and includes two elementary schools. The population was 2,447 at the 2010 census.

A few homes (such as on Huron Drive) were built in the 1930s, but most of the town developed in the 1940s and early 1950s, consisting of single-family homes with some streets of duplex homes; the Talbert Drive homes were added in the 1960s. In those days many town residents were scientists (as Mayor Armhold was) at the adjacent U.S. Naval Research Laboratory, while others were military band musicians or other Federal employees. The town's population was approximately 3,600 in 1960, almost 50% more than the 2010 population of 2,447, perhaps due to households having more children in 1960.

After decades of former governmental stability, in the 2000s the town made headlines repeatedly as two of its recent mayors were embroiled in clashes with the town council. One mayor, Joyce Beck, was ousted from office after changes to the Town Charter. In June 2009 her successor, Myles Spires, filed a $15 million lawsuit against the town for malicious prosecution after being cleared of all charges initiated by the town for misuse of town's funds.

The Capital Beltway (I-95/495), which was opened in the early 1960s and which includes the Woodrow Wilson Bridge that connects Oxon Hill to Alexandria, Virginia, is directly south of the town. Forest Heights is bordered on the north by the Eastover Shopping Center. Several miles of less affluent areas within the District of Columbia (see Anacostia, Washington Highlands, and Bellevue) also lie to the north of it. Forest Heights has its own town police force, in addition to a Prince George's County police station right at the town limits in the aforementioned Eastover Shopping Center. Rivertowne Shopping Center with a K-Mart and a Home Depot, and a very large, modern public library, are both just one to two miles from Forest Heights. Forest Heights is bordered on the south by the large new National Harbor conference center and resort, which opened its first phase in April 2008.

There were 868 households, of which 31.3% had children under the age of 18 living with them, 39.3% were married couples living together, 24.4% had a female householder with no husband present, 7.6% had a male householder with no wife present, and 28.7% were non-families. 22.7% of all households were made up of individuals, and 7.1% had someone living alone who was 65 years of age or older. The average household size was 2.82 and the average family size was 3.26. 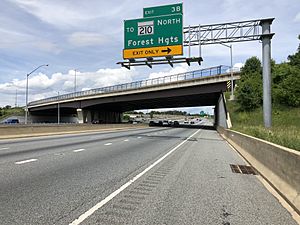 I-95/I-495 northbound at the exit for Forest Heights

The most prominent highway serving Forest Heights is Interstate 95/Interstate 495 (the Capital Beltway). I-495 follows the Capital Beltway around Washington, D.C., providing access to its many other suburbs. I-95 only follows the eastern portion of the beltway, diverging away from the beltway near both its north and south ends. To the north, I-95 passes through Baltimore, Philadelphia, New York City and Boston on its way to Canada, while to the south, it traverses Richmond on its way to Florida.

All content from Kiddle encyclopedia articles (including the article images and facts) can be freely used under Attribution-ShareAlike license, unless stated otherwise. Cite this article:
Forest Heights, Maryland Facts for Kids. Kiddle Encyclopedia.