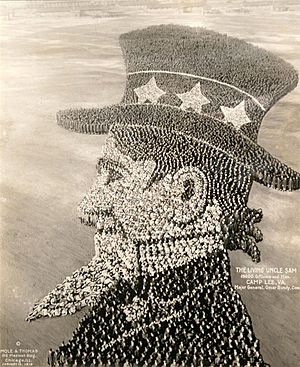 "The Living Uncle Sam" formed by 19,000 military officers and men at Camp Lee, Virginia in 1918, during World War I

Fort Lee also hosts two Army museums, the U.S. Army Quartermaster Museum and the U.S. Army Women's Museum. The Army's Ordnance Museum relocated to Fort Lee in 2009-2010 and has plans to return its collection to public display at Fort Lee. The fort is named for Confederate General Robert E. Lee. Fort Lee is also a census-designated place (CDP), with population of 3,393 at the 2010 census.

Just 18 days after a state of war with Germany was declared, the first Camp Lee was selected as a state mobilization camp and later became a division training camp.

In June 1917, building began and within sixty days some 14,000 men were on the installation.

When construction work ended, there were accommodations for 60,335 men. On 15 July 1917, the War Department announced that the camp would be named in honor of General Robert E. Lee, the most famous of the Confederate Civil War commanders.

After World War I, Camp Lee was taken over by the Commonwealth of Virginia and designated a game preserve. Later, portions of the land were incorporated into the Petersburg National Battlefield and the Federal Correctional Institution, Petersburg.

In 1920 Camp Lee was still active, as the US 1920 Census showed many soldiers still stationed there.

In October 1940, the War Department ordered the construction of another Camp Lee on the site of the earlier installation. Built as rapidly as the first, construction was still ongoing when the Quartermaster Replacement Training Center (QMRTC) started operation in February 1941. Their number grew to 25,000 in 1942, and peaked at 35,000 in 1944.

Camp Lee was also the home of a Medical Replacement Training Center (MRTC), but as the Quartermaster training increased, it was decided to relocate the MRTC at Camp Pickett.

Later, the QMRTC was re-designated as an Army Services Forces Training Center, but it retained its basic mission of training Quartermaster personnel.

While the QMRTC was getting underway, the Quartermaster School was transferred to Camp Lee. A full program of courses was conducted, including Officer Candidate School. By the end of 1941, Camp Lee was the center of both basic and advanced training of Quartermaster personnel and held this position throughout the war.

When World War II ended, the fate of Camp Lee was in question. In 1946, the War Department announced that Camp Lee would be retained as a center for Quartermaster training. Official recognition of its permanent status was obtained in 1950 and the post was redesignated as Fort Lee.

Immediately troops began Quartermaster training for the Korean War and continued for the next three years. Fort Lee also had a Women's Army Corps (WAC) training center. After the Korean War, progress was made on an ambitious permanent building program.

Under the twenty-year program, Fort Lee changed from an installation of temporary wooden structures to a modern Army post with permanent brick and cinder block buildings.

Profound changes were evident at Fort Lee during 1962. The post became a Class 1 military installation under Second United States Army. The Quartermaster School became a part of the Continental Army Command service school system and was also selected to serve as the home of the Quartermaster Corps and Corps Historian. The Second United States Army was inactivated at Fort Lee in 1966 until its reactivation at Fort Gillem, Georgia in 1983.

In July 1973, Fort Lee came under the control of the U.S. Army Training and Doctrine Command.

Fort Lee is the country's first army post to host a 'full-size' statue commemorating the service of women in the Army. The statue was unveiled in 2013.

In 2005 a Base Realignment and Closure (BRAC) law was passed by Congress. One of BRAC's requirements was the relocation of the U.S. Army Ordnance Center and School headquarters, the Ordnance Mechanical Maintenance School, the Ordnance Munitions and Electronic Maintenance School, and the Ordnance Museum to Fort Lee by the end 2011. The transfer of artifacts from Aberdeen to Fort Lee began in August 2009, with the former museum now designated the U.S. Army Ordnance Training and Heritage Center at Fort Lee.

According to the United States Census Bureau, the CDP has a total area of 8.4 square miles (21.6 km²), all of it land.

There were 1,401 households out of which 72.8% had children under the age of 18 living with them, 70.0% were married couples living together, 14.3% had a female householder with no husband present, and 12.7% were non-families. 11.4% of all households were made up of individuals and 0.1% had someone living alone who was 65 years of age or older. The average household size was 3.27 and the average family size was 3.53.

All content from Kiddle encyclopedia articles (including the article images and facts) can be freely used under Attribution-ShareAlike license, unless stated otherwise. Cite this article:
Fort Lee (Virginia) Facts for Kids. Kiddle Encyclopedia.