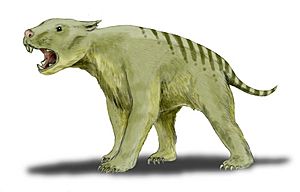 Reconstruction of Thylacoleo carnifex, the “Marsupial Lion”, remains of which have been found in the cave 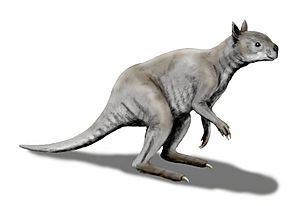 Fossil Cave (5L81), formerly known as The Green Waterhole, is a cave in the Limestone Coast region of south-eastern South Australia. It is located in the gazetted locality of Tantanoola about 22 kilometres (14 miles) north-west of the city of Mount Gambier, only a few metres from the Princes Highway (Route B1) between Mount Gambier and Millicent. It is notable both as a paleontological site and as a cave diving site.

The cave is formed in 30-million-year-old Oligocene coralline limestone. The cave is a karst sinkhole and is largely filled with water. The surface depression is about 20 metres (66 ft) long and 10 metres (33 ft) wide. Beneath the surface it extends to a maximum length of 70 metres (230 ft) and a width of 30 metres (98 ft).

The name of the cave was changed on 23 April 1989 by the Government of South Australia from The Green Waterhole to Fossil Cave with the change being published in The South Australian Government Gazette on 4 May 1989.

Since the mid 1960s, a variety of Pleistocene subfossil material of birds and mammals has been found and recovered by divers from the surface of a rockpile to a depth of about 15 metres (49 ft) below the water surface. The probable accumulation mode was by animals drowning when they fell into the cave while attempting to use it as a source of drinking water. Dating of the subfossil remains indicated that their deposition occurred mainly between 15,000 and 40,000 years ago. As well as representing many living animals, examples of extinct species recovered from the cave include the birds Centropus colossus and Orthonyx hypsilophus, and the mammals Thylacinus cynocephalus, Thylacoleo carnifex, Propleopus oscillans, Macropus titan, Protemnodon anak, and the sthenurine kangaroos Procoptodon gilli, Procoptodon maddocki and Simosthenurus occidentalis.

The cave's submerged extent has been surveyed at least three times including by the Flinders University Underwater Club (FUUC) in 1978, Allum and Garrad in 1979 and the SAUSS in 1987.

Fossil Cave is a notable cave diving site. Access for cave diving is limited to holders of the Cave Divers Association of Australia's Advanced Cave grade.

All content from Kiddle encyclopedia articles (including the article images and facts) can be freely used under Attribution-ShareAlike license, unless stated otherwise. Cite this article:
Fossil Cave Facts for Kids. Kiddle Encyclopedia.