Tantanoola (postcode 5280) is a town in South Australia. The name is derived from the aboriginal word tentunola, which means boxwood / brushwood hill or camp. Tantanoola was originally named 'Lucieton' by Governor Jervois after his daughter Lucy Caroline, on 10 July 1879. It was changed by Governor Robinson to 'Tantanoola' on 4 October 1888. At the 2006 census, Tantanoola had a population of 255.

The township of Tantanoola is situated in the Hundred of Hindmarsh, 425 km south east of Adelaide, and was once a portion of Mayurra Station. It was the second town of importance on the Rivoli Bay to Mount Gambier railway line which was built in 1876, converted from narrow to broad gauge in 1956 and ceased operating in 1995. The historic Tantanoola railway station is listed on the South Australian Heritage Register. 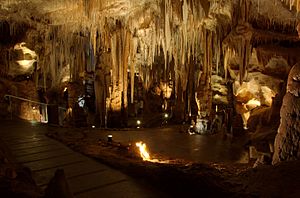 Tantanoola is known for the Tantanoola Tiger, a phantom cat which supposedly stalked the area during the late nineteenth century. In August 1895 an animal was shot by one Thomas John Donovan, which was believed to have been the mysterious predator. The animal turned out to be more like a wolf than a cat. Later, it was determined to be an Arabian wolf, although how it arrived in South Australia has been the subject of a number of theories. It is currently preserved and on display at the Tantanoola Hotel (which is also known colloquially as the Tantanoola Tiger Hotel). Tantanoola Caves Conservation Park, featuring a spectacular dolomite cave is located nearby.

Australian poet Max Harris wrote a poem titled "The Tantanoola Tiger", which is included in the collection The Angry Penguin: the Poetry of Max Harris, published by the National Library of Australia.

The next station northwest along the railway line was Snuggery. Snuggery is not recognised as a separate town, but is part of Tantanoola towards Millicent. The area includes the Snuggery Power Station with three diesel-powered gas turbines, and the Kimberly-Clark woodchip and paper pulp mill. The pulp mill was commissioned in 1992 but ceased operations in 2011. It was demolished in November 2012.

All content from Kiddle encyclopedia articles (including the article images and facts) can be freely used under Attribution-ShareAlike license, unless stated otherwise. Cite this article:
Tantanoola, South Australia Facts for Kids. Kiddle Encyclopedia.