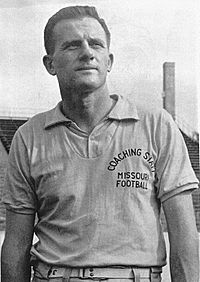 John Franklin Broyles (December 26, 1924 – August 14, 2017) was an American football player and coach, athletics administrator, and broadcaster. He served as the head football coach at the University of Missouri in 1957 and at the University of Arkansas from 1958 to 1976. Broyles also was Arkansas' athletic director from 1974 until his retirement on December 31, 2007.

Broyles was born in Decatur, Georgia. He studied at the Georgia Institute of Technology.

As a head football coach, Broyles compiled a record of 149–62–6. His mark of 144–58–5 in 19 seasons is the most wins and the most games of any coach in Arkansas history. With Arkansas, Broyles won seven Southwest Conference titles and his 1964 team was named a national champion by a number of selectors including the Football Writers Association of America. He was inducted into the College Football Hall of Fame in 1983.

Broyles died in Fayetteville, Arkansas on August 14, 2017 of Alzheimer's disease at the age of 92.

All content from Kiddle encyclopedia articles (including the article images and facts) can be freely used under Attribution-ShareAlike license, unless stated otherwise. Cite this article:
Frank Broyles Facts for Kids. Kiddle Encyclopedia.