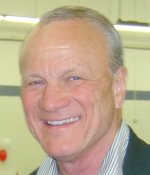 Barry Switzer (born October 5, 1937 in Crossett, Arkansas, USA) was an American football coach. He coached both professional and college football for 32 years. Switzer is one of only three head coaches to win both a college football national championship and a Super Bowl. He has one of the highest winning percentages in the history of college football.

After the 1966 season, Switzer became an assistant coach at the University of Oklahoma. He became head coach there in 1973. During his first two years as head coach, Oklahoma did not lose any games and won the national championship two time. They won the championship a third time in 1985. Switzer left Oklahoma in 1989. His record there was 157 wins, 29 losses and 4 ties.

In 2001, Switzer was elected into the College Football Hall of Fame. On September 9, 2007, he began working with the FOX television network on its NFL pre-game show.

All content from Kiddle encyclopedia articles (including the article images and facts) can be freely used under Attribution-ShareAlike license, unless stated otherwise. Cite this article:
Barry Switzer Facts for Kids. Kiddle Encyclopedia.