Freeman Junction, a ghost town in Kern County, California, USA, was first homesteaded in the early 1870s. Freeman S. Raymond built a stage coach station here to accommodate travelers between the desert mines and Los Angeles. A group of Native Americans who were defending their homes and families in 1909 killed off the homesteaders and burned the stage station, after which the property lay dormant for several years. It was re-homesteaded in the 1920s by Clare C. Miley, who was born in 1900, and his wife. By the 1930s their small stone cabin became a gas station/car repair and later, a restaurant and some mining activities dominated the site. In 1953 a post office was planned, but never materialized and residents had to travel seven miles to Inyokern to collect their mail. By June, 1978, the town had died once again and the remains of the town have since been removed by passersby. Today, the site has reverted to its natural state and nothing remains.

Bedrock mortars near the original spring suggest that this area was regularly used as a campsite by Native Americans.

In 1834 explorer Joseph R. Walker passed this junction of Indian trails after crossing the Sierra Nevada via Walker Pass. In the winter of 1849-50, forty-niner parties, en route to the California gold fields, passed through here after escaping from Death Valley.

In 1873 or early 1874, Freeman S. Raymond, an original forty-niner, bought or built a stagecoach station here, at the junction of the Walker Pass road (the route of modern California 178) and the road to Los Angeles (now replaced by California State Route 14). Both roads carried traffic to and from the mines then in the area. The Walker Pass road led to the Kern River mines, while the Los Angeles road continued further north and east to the mines at Cerro Gordo, the Panamints, and later Darwin and Bodie, California.

On February 25, 1874, Tiburcio Vasquez and his associates robbed several freight wagon crews at Raymond's station (then called Coyote Holes). They had apparently scouted the location from a nearby rock formation, now known as Robber's Roost. Vasquez's group also ambushed and robbed an arriving stagecoach before making their escape. One of the robbery victims was shot in the leg.

Raymond continued operating the stagecoach stop, which after 1889 or 1890 included a post office, until his death in August, 1909. The station burned down a few years later. The Los Angeles Aqueduct now passes through the site. 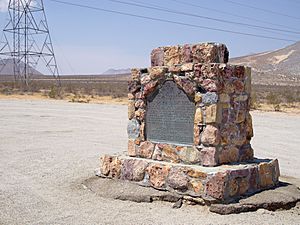 California Historical Landmark #766 is located nearby, beside California 178 within sight of the junction with California 14.

All content from Kiddle encyclopedia articles (including the article images and facts) can be freely used under Attribution-ShareAlike license, unless stated otherwise. Cite this article:
Freeman Junction, California Facts for Kids. Kiddle Encyclopedia.