The European history of Freshwater is a long one dating back to 1877. Chinese market gardeners moved into the area, after exhausting their chances on the Hodgkinson Goldfields, leased small plots from the landowners, successfully growing rice, bananas, pineapples and other tropical crops. Freshwater Post Office opened by April 1925 (a receiving office, earlier named Stratford, had been open from 1897).

A rice mill was established on the Lower Freshwater Creek and was being successfully operated by local man, Joseph Kipling in 1891. Chinese farmers grew rice in the adjacent fields.

The Kuranda Scenic Railway has a stop in the suburb. 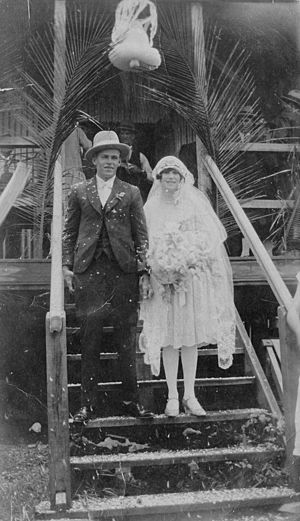 All content from Kiddle encyclopedia articles (including the article images and facts) can be freely used under Attribution-ShareAlike license, unless stated otherwise. Cite this article:
Freshwater, Queensland Facts for Kids. Kiddle Encyclopedia.