Fries (pronounced "freeze") is an incorporated town located on the New River in Grayson County, Virginia, 24 kilometers (15.5 mi) north-east of the county seat in Independence — in Virginia's Blue Ridge Highlands and on Virginia's musical heritage trail, The Crooked Road.

Named after prominent cotton mill owner, Francis Henry Fries, the town is noted as the former site of Washington Mill (1903-1989); as one of three end points of the New River Trail State Park and as the host of annual music festivals reflecting its strong bluegrass and country music traditions — with its August Old-Time Fiddlers' and Bluegrass Convention and its September Festival by the New River.

The Town of Fries is located on the north banks of the New River about 24 kilometers north-east of the Grayson County seat in Independence. It was named for North Carolina cotton mill owner Colonel Francis Henry Fries. Jim 'Pipe' Carico (of Stephens Creek, Virginia, the nearest incorporated town) contacted Fries in 1900 and proposed Bartlett Falls on New River as a site for a hydroelectric dam that could power a cotton mill. Fries purchased the surrounding rural farmland then hired a local labor force to build a dam, a cotton mill and a full-service company owned town. By 1901, the New River Train was extended to the mill site and Fries petitioned the Virginia State Legislature to incorporate the new town of Carico, VA in honor of Jim 'Pipe' Carico. For reasons that are not well documented, the town name was instead legislatively changed to Fries, Virginia and officially incorporated in 1902. Despite the heavy reliance on manual labor, mules and oxen, the town's construction progressed quickly and the open call for employment spurred migration to the town. Around 300 houses, a post office, a church and a company commissary were wedged into the surrounding hillside before the mill began operation in February 1903. The mill continued in operation until 1989. At the time the mill closed, it employed 1,700 people. Fries High School also closed in 1989. The students from Fries, along with students from nearby Independence High School were combined to form Grayson County High School, located in Independence.

Although the entire Appalachian region is known for its Bluegrass and traditional, or "old-timey" music and musicians, the region around Mount Airy, North Carolina is one of the few areas of the United States where this music has remained prominent, even among young people. The Old Fiddler's Convention, one of the most prominent traditional music contests in the United States, has been held annually in the nearby city of Galax since 1935. It has long attracted the best up-and-coming bluegrass musicians. The Blue Ridge Music Center with its amphitheater and music museum of old-time music is just a short distance away on the Blue Ridge Parkway at Milepost 213. 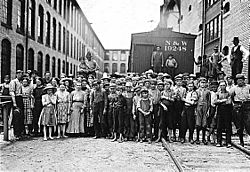 A part of the spinning force working in the Washington Cotton Mills. May 1911, Photograph by Lewis Hine

There were 298 households, out of which 17.4% had children under the age of 18 living with them, 46.3% were married couples living together, 9.1% had a female householder with no husband present, and 40.6% were non-families. 39.3% of all households were made up of individuals, and 23.8% had someone living alone who was 65 years of age or older. The average household size was 2.06 and the average family size was 2.71.

The historic Fries Recreation Center is located in downtown Fries.

In 1910 an increasing need was seen for a community center for the employees of the mill. A site was selected that would be central for the townspeople and construction was begun for the Fries Lyceum.

The building provided reading rooms, and a skating rink became the gathering place for the young people of the town. In 1923, the Lyceum was renovated and reorganized as a Young Men's Christian Association (YMCA). The building now contained the only gymnasium in the Carroll-Grayson area, along with a movie theatre. The need to expand was seen again in the late 1940s, and in 1948, a new lobby, bowling alley, kitchen and dining area, library, and additional game rooms were added. The swimming pool built in the front, facing new River, was the most popular addition.

All content from Kiddle encyclopedia articles (including the article images and facts) can be freely used under Attribution-ShareAlike license, unless stated otherwise. Cite this article:
Fries, Virginia Facts for Kids. Kiddle Encyclopedia.