Fritz Cove is a bay on the northwestern coast of Douglas Island in the City and Borough of Juneau, Alaska, United States. Lying in Stephens Passage, it is 8 miles (13 km) northwest of the city of Juneau.

Historically, Fritz Cove was used for fishing by Alaska Natives, especially the Auke people. A summer camp named Aangoox̱a Yé was located at the mouth of Fish Creek. Scottish-American naturalist John Muir camped at the bay on November 10, 1879.

The area was surveyed by the USS Jamestown in 1880; Lieutenant F. M. Symonds named the bay after his son. The name was first published by the U.S. Coast and Geodetic Survey in 1881, collected by the United States Geological Survey between 1976 and 1981, and entered into the Geographic Names Information System on March 31, 1981.

Fritz Cove and Gastineau Channel became linked in 1960 through a United States Army Corps of Engineers effort to dredge a navigation route.

Streams flowing into Fritz Cove include Cove Creek, Elevenmile Creek, and Fish Creek. Islands in the bay include Spuhn Island. Depths in the bay range from 8 to 30 fathoms (15 to 55 m). 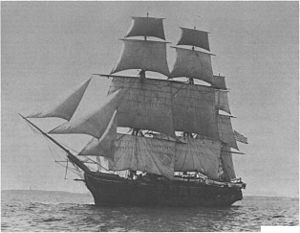 The USS Jamestown explored southeast Alaska, including Fritz Cove, in 1880 and 1881.

Dungeness crabs, Tanner crabs, and king salmon live in the cove; molting of the male Tanner crabs in the cove has been documented since the 1970s. Scoters, grebes, mergansers, and marbled murrelets can also be seen in the area.

All content from Kiddle encyclopedia articles (including the article images and facts) can be freely used under Attribution-ShareAlike license, unless stated otherwise. Cite this article:
Fritz Cove Facts for Kids. Kiddle Encyclopedia.