During the 2011 Fukushima nuclear disaster in Japan, three nuclear reactors were damaged by explosions. 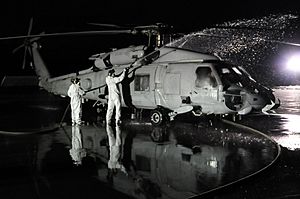 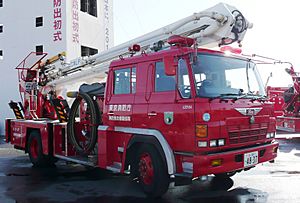 The Fukushima nuclear disaster is a series of ongoing equipment failures, reactor meltdowns, and releases of radioactive materials at the Fukushima Daiichi Nuclear Power Plant, following the Tōhoku earthquake and tsunami on March 11, 2011. The plant has six separate Nuclear reactors maintained by the Tokyo Electric Power Company (TEPCO). The accident is the second biggest nuclear accident after the 1986 Chernobyl disaster, but more complex as all reactors are involved.

At the time of the quake, reactor 4 had been de-fueled while 5 and 6 were in cold shutdown for planned maintenance. The remaining reactors shut down automatically after the earthquake, but the entire plant was flooded, including low-lying generators and electrical switchgear in reactor basements and external pumps for supplying cooling seawater. The connection to the electrical grid was broken. All power for cooling was lost and reactors started to overheat. There was a partial core meltdown in reactors 1, 2, and 3; hydrogen explosions destroyed the upper part of the buildings housing reactors 1, 3, and 4; an explosion damaged the containment inside reactor 2; fires broke out at reactor 4. Despite being initially shutdown, reactors 5 and 6 began to overheat. Spent nuclear fuel rods stored in pools in each reactor building overheated as water levels in the pools dropped.

Fears of radiation leaks led to a 20 km (12 mi) radius evacuation around the plant while workers suffered radiation exposure and were temporarily moved out at various times. Grid power was restored to parts of the plant on 20 March, but machinery for reactors 1 through 4, damaged by floods, fires and explosions, was still not working. Flooding with radioactive water through the basements of units 1–4 continues to prevent access to carry out repairs. Measurements in areas of northern Japan 30–50 km from the plant showed radioactive caesium levels high enough to cause concern. Food grown in the area was banned from sale. It was suggested that worldwide measurements of iodine-131 and caesium-137 indicate that the releases from Fukushima are of the same order of magnitude as the releases of those isotopes from the Chernobyl disaster in 1986;

Tokyo officials said that tap water should not be used to prepare food for children. Plutonium contamination has been detected in the soil at two sites in the plant. Two workers hospitalized as a precaution on 25 March had been exposed to between 2000 and 6000 mSv of radiation at their ankles when standing in water in unit 3. Radiation levels varied widely over time and location.

The nuclear emergencies at Japan's Fukushima I and other nuclear facilities raised questions about the future of nuclear power. Platts, an energy news website, said that "the crisis at Japan's Fukushima nuclear plants has prompted leading energy-consuming countries to review the safety of their existing reactors and cast doubt on the speed and scale of planned expansions around the world". Following the Fukushima nuclear disaster, the International Energy Agency halved its estimate of additional nuclear generating capacity to be built by 2035.

All content from Kiddle encyclopedia articles (including the article images and facts) can be freely used under Attribution-ShareAlike license, unless stated otherwise. Cite this article:
Fukushima nuclear disaster Facts for Kids. Kiddle Encyclopedia.