Geography of Iran facts for kids 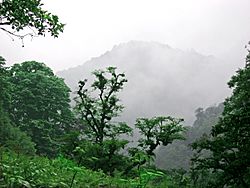 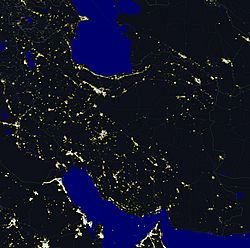 The Iranian landscape is predominantly mountainous, with high contrasting green oases. (Image was taken in the southern Alborz range near Firouzkuh)

The Geography of Iran contains mountains, rivers as well as plain land. Iran is a country of Southwest Asia, it borders the Gulf of Oman, the Persian Gulf, and the Caspian Sea, between Iraq and Pakistan. Iran is one of the world's most mountainous countries.

Iran has an area of 1,648,000 square kilometres and is the sixteenth largest in size. Iran is bordered to the north by Armenia, Azerbaijan, and Turkmenistan. The border with these countries are more than 2,000 kilometres long and includes nearly 650 kilometres of water along the southern shore of the Caspian Sea.

All content from Kiddle encyclopedia articles (including the article images and facts) can be freely used under Attribution-ShareAlike license, unless stated otherwise. Cite this article:
Geography of Iran Facts for Kids. Kiddle Encyclopedia.