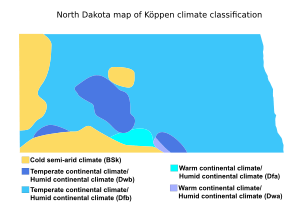 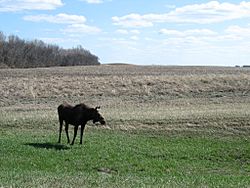 Shot within the North Dakota section of the Great Plains where a small population of Moose can be found.

The Geography of North Dakota consists of three major geographic regions: in the east is the Red River Valley, west of this, the Missouri Plateau. The southwestern part of North Dakota is covered by the Great Plains, accentuated by the Badlands. There is also much in the way of geology and hydrology.

The Red River Valley takes up the eastern portion of the state, with the Red River of the North forming the border with Minnesota.

The Valley is the remnant lake bed of the ancient Lake Agassiz. It is very flat, and is quite fertile. This area of North Dakota is mostly farm country, with wheat, sugarbeets, and maize as staple crops, and along with other crops and livestock, cover the area. The valley contains the lowest point in North Dakota which is the Red River at Pembina, at 750 feet (230 m) above sea level.

The Missouri Plateau and Drift Prairie

The Badlands lie in southwestern North Dakota. The Badlands are exposed surfaces of stone and clay that erosion has shaped into striking formations; many shades of browns, reds, grays, and yellows appear in buttes, pyramids, domes, and cones. They stretch for about 190 miles (305 km) and are from 6 to 20 miles (10 to 30 km) wide. In some areas of the Badlands the rocks contain lignite coal that has been burning for many years. The clay above these coal beds has turned bright pink and red. White Butte, the highest point in North Dakota, is located in the Badlands, and stands 3506 feet (1069 m) above sea level.

All content from Kiddle encyclopedia articles (including the article images and facts) can be freely used under Attribution-ShareAlike license, unless stated otherwise. Cite this article:
Geography of North Dakota Facts for Kids. Kiddle Encyclopedia.