Geography of the British Indian Ocean Territory facts for kids

The British Indian Ocean Territory prior to the Seychelles' independence in 1976. The land at bottom left is the northern tip of Madagascar. (Desroches is not labelled, but is a part of the Amirante Islands.) 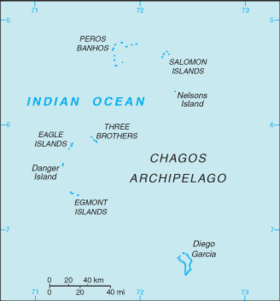 Map of the British Indian Ocean Territory since 1976.

The British Indian Ocean Territory (BIOT) is an archipelago of 55 islands in the Indian Ocean, located south of India. It is situated approximately halfway between Africa and Indonesia. The islands form a semicircular group with an open sea towards the east. The largest, Diego Garcia, is located at the southern extreme end. It measures 60 square kilometres (23 sq mi) and accounts for almost three-quarters of the total land area of the territory. Diego Garcia is the only inhabited island and is home to the joint UK-US naval support facility. Other islands within the archipelago include Danger Island, Three Brothers Islands, Nelson Island, and Peros Banhos, as well as the island groups of the Egmont Islands, Eagle Islands, and the Salomon Islands.

BIOT is an archipelago of 55 islands. They were annexed by the UK in 1965 under the Treaty of Paris from a much larger archipelago which in 1804 consisted of 2,300 independent islands. BIOT is situated in the Indian Ocean near the Equator. It is roughly halfway between Africa and Indonesia, about 1,000 miles (1,600 km) southwest of India. It is situated approximately 1,600 kilometres (990 mi) from South India and 600 kilometres (370 mi) to the south of the Maldives With a coastline stretching 698 kilometres (434 mi), it is the southern extension of the Chagos-Laccadive Ridge. The Chagos Islands archipelago are northeast of Mauritius, while Agalega Islands are due north. The islands are characterised as coral atolls whose formation occurred at the summits of volcanic mountains these being submerged. The terrain is flat and low, with most areas not exceeding 2 metres (6 ft 7 in) above sea level.

The climate is tropical marine; hot, humid, and moderated by trade winds. It is located outside the route of the cyclones. 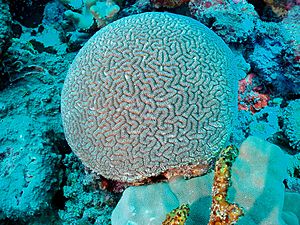 In 2010, the whole territory, as well as 545,000 square kilometres (210,426 sq mi) of ocean around the islands, was declared a marine reserve. It is known formally as the Chagos Marine Protected Area, because it is a "pristine ocean ecosystem now representing 16% of the world's fully protected coral reef." Fishing is banned within the reserve area. Diego Garcia is a Ramsar site. 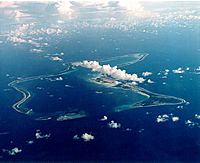 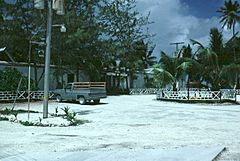 Left: Diego Garcia. Right: All of the unpaved roads present on the atoll of Diego Garcia are made of white crushed coral.

The coral atoll of Diego Garcia is approximately 1,970 nautical miles (3,650 km) east of the coast of Africa (at Tanzania), 967 nautical miles (1,791 km) south-southwest of the southern tip of India (at Kanyakumari) and 2,550 nautical miles (4,720 km) west-northwest of the west coast of Australia (at Cape Range National Park, Western Australia). Diego Garcia lies at the southernmost tip of the Chagos-Laccadive Ridge — a vast submarine range in the Indian Ocean. The total area encompassed by the atoll is 169.6 square kilometres (65.5 sq mi). At the entrance to the lagoon, there are three small islands, and these are East Island (7.49 hectares (18.5 acres)), Middle Island (4.98 hectares (12.3 acres)), and West Island (2 hectares (4.9 acres)). In some areas, the atoll has both marshes and wetlands. The ecosystem consists of undisturbed tropical forests.

The Peros Banhos Islands, which are the largest group on the Chagos Bank, consists of 27 islands scattered around the rim of an immense lagoon, which has a perimeter of 12 leagues (58 km) and enclosed some 310 square km of water. They consist of several groups of islets and reefs; deep channels separate them. They had a population of some 400 islanders before the evacuation in 1965, the largest number living on Île du Coin in the southwest corner of the atoll (in the previous century, the dominant island was Île Diamant in the northwest corner of the atoll); in all, there were seven inhabited islands.

Île Boddam, with Île Diable in the background.

Some 25 km east of Peros Banhos Atoll, the smaller Salomon group comprises eleven islands clustered around a lagoon measuring 8 km long and 5 km wide. Prior to the removal of its population, six of the islands were inhabited with a total of about 250 islanders. Île Boddam in the southwest was the principal settlement, while Île Takamaka in the east was the centre of boatbuilding for the archipelago.

Lying between Diego Garcia in the south, and the Peros Banhos and Salomon Atolls in the north, the remaining coralline islands are scattered over a wide area of the Great Chagos Bank, an area of atolls, reefs and shoals with an average depth of water of some 20 metres. Uninhabited Île Nelson lies 35 km south of Salomon Atoll. A hundred km to the southwest of Nelson are the 3 islands of Trois Frères, which were briefly inhabited in the 19th century. Further west lies the Île d'Aigle, which was inhabited until 1935. Île Vache Marine, the southernmost of the Eagle Islands, lies south.

Finally, Six Îles Atoll (also called Egmont), 5 leagues (24 km) further south of Danger, was also occupied for short periods during the mid 19th century until 1935. Besides the six named islands, the atoll also includes a seventh unnamed island. The atoll, in the form of "U", is a small strip of land with width varying from 30 metres (98 ft) to a maximum of 3 kilometres (1.9 mi) at its northern extremity. The total land area of the atoll is 2,430 hectares (6,000 acres). A fringing reef circumscribes the atoll. There are two openings into the ocean. It almost encompasses a large lagoon. The lagoon itself is 20 kilometres (12 mi) in length and is more than 10 kilometres (6.2 mi) in width. Rounded pumice stones found on the eastern beach of the island by one of the explorers of the island have been inferred as debris from the Krakatoa volcanic eruption of 1883 The atoll is 23 leagues (110 km) to the northwest of Diego Garcia, on the Great Chagos Bank. The islands are connected by reefs which are steep and there are no locations for anchorage on its shores. 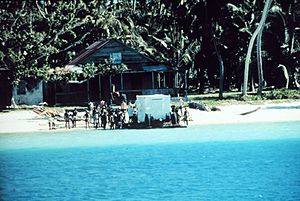 US personnel bringing survey equipment onto Diego Garcia, helped by Ilois, 1971.
Main page: Depopulation of Chagossians from the Chagos Archipelago

In the late 18th century, coconut palm plantations were established on the island to produce copra for which slave labourers were brought in from Africa. A small population lived in the archipelago, descendants of Mauritian laborers working the copra industry. After an agreement was signed in 1966 between Britain and the United States, the US built a military base and forcibly evacuated all indigenous people; 1,200 from Diego Garcia, Ile du Coin, and Île Boddam were relocated to Mauritius, while others went to the Seychelles. In 2000, the Chagos islanders won an appeal which restored their authority to live on the islands, and they received UK citizenship in the following year. A 2008 court decision blocked their return. Further complications arose after the 2010 establishment of the world's largest marine reserve as the islanders' commercial fishing capabilities, if they returned to the archipelago, would be curtailed, thus hampering their traditional livelihood.

All content from Kiddle encyclopedia articles (including the article images and facts) can be freely used under Attribution-ShareAlike license, unless stated otherwise. Cite this article:
Geography of the British Indian Ocean Territory Facts for Kids. Kiddle Encyclopedia.