Major General George Owen Squier (March 21, 1865 – March 24, 1934) was born in Dryden, Michigan, United States. He graduated from the United States Military Academy in the Class of 1887 and received a Ph.D. from Johns Hopkins University in 1893.

He was famous both in the United States and in Europe as a soldier, a scientist and as an inventor. He is known for what today is called Muzak. 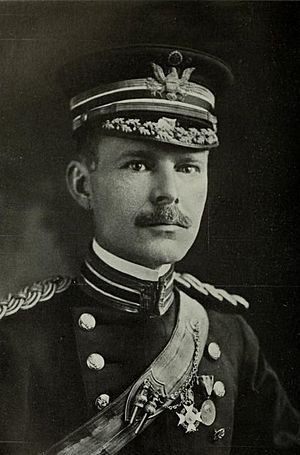 George Squier wrote and edited many books and articles on the subject of radio and electricity. An inventor, he and Dartmouth professor Albert Cushing Crehore developed a magneto-optical streak camera "The Polarizing Photo-chronograph" in 1896 to measure the speed of projectiles both inside a cannon and directly after they left the cannon barrel. This was one of the earliest photonic programs. They also worked to develop synchronous AC telegraphic systems. His biggest contribution was that of telephone carrier multiplexing in 1910 for which he was elected to the National Academy of Science in 1919.

As executive officer to the Chief Signal Officer, U.S. Signal Corps in 1907, Squier was instrumental in the establishment of the Aeronautical Division, U.S. Signal Corps, the first organizational ancestor of the US Air Force. He also was the first military passenger in an airplane on September 12, 1908 and, working with the Wright Brothers, was responsible for the purchase of the first airplanes by the US Army in 1909.

From May 1916 to February 1917, he was Chief of the Aviation Section, U.S. Signal Corps, the first successor of the Aeronautical Division, before being promoted to major general and appointed Chief Signal Officer during World War I.

In 1922, he created Wired Radio, a service which piped music to businesses and subscribers over wires. In 1934, he changed the service's name to 'Muzak'.

Asked how to say his name, he told The Literary Digest it was pronounced like the word square.

He was a member of the Sons of the American Revolution.

He died in Washington, D.C., at George Washington Hospital on March 24, 1934 of pneumonia, and was buried in Arlington National Cemetery. 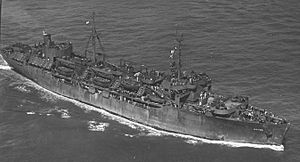 General Squier Park, a historic district and waterpark in his hometown of Dryden, Michigan, is named in his honor.

All content from Kiddle encyclopedia articles (including the article images and facts) can be freely used under Attribution-ShareAlike license, unless stated otherwise. Cite this article:
George Owen Squier Facts for Kids. Kiddle Encyclopedia.