Giant Food Stores, LLC is an American supermarket chain that operates stores in Pennsylvania, Maryland, Virginia and West Virginia under the names of Giant and Martin's. Giant is a subsidiary of Netherlands-based Ahold Delhaize. Giant Food Stores are often referred to as Giant-Carlisle to distinguish it from sister company Giant-Landover. A big difference between Giant of Landover and Giant of Carlisle is that the Landover Company is unionized while Giant of Carlisle is non union with the exception of stores in the Lewistown and Philadelphia areas of Pennsylvania. 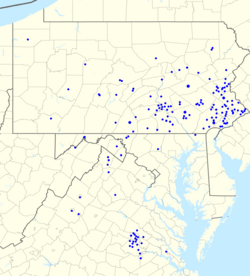 Giant was founded in 1923, when David Javitch opened a small meat market in Carlisle, Pennsylvania. The Carlisle Meat Market, as it was known, began as a two-man butcher shop.

David Javitch, otherwise known as "D.J.", built his business on the premise of "the best product at the fairest price." He spent most of his hours in the store, and his children were raised there. His store prospered during the 1920s and 1930s. In 1936, Javitch decided to take a chance on a new business opportunity.

He purchased a store in Lewistown, Pennsylvania, which he named the Giant Shopping Food Center. It was a big change from the original Carlisle Meat Market in that it was a total grocery store. It was very modern and offered customers the opportunity to purchase their dry goods and perishables under one roof; a new concept at that time. The store was a great success, and soon a decision was made to expand the Carlisle store from a basic meat market into a full-fledged grocery store.

Prior to purchasing the Lewistown store, he purchased a store in Hagerstown, Maryland, that opened and closed within the same month. Though it was a short-lived and costly venture, it provided a learning experience to Javitch. In addition, his main store in Carlisle was destroyed by fire, and the Lewistown store was completely flooded on two separate occasions.

After each setback, Javitch started over, adding more features for his customers. The Carlisle store was very modern for its time, with features like a parking lot, baggers, and outside lighting for the safety of employees and customers.

The stores continued to flourish in the 1950s as some serious decisions about the business were made. Shopping malls became a new American experience with the population moving outside of the cities and into the suburbs, and Javitch took advantage of the strip malls dotting the landscape. As a result, the company embarked on a plan of steady growth, opening new stores in suburban areas. In 1968, the ninth store opened in Harrisburg, Pennsylvania with Lee Javitch, David's son, serving as President of Giant Food Stores.

In 1970, a strategic decision was made to compete with larger regional supermarket chains. The company's growth accelerated with the purchase of the Martin's chain (though these stores retain the Martin's name to this day) in Hagerstown, Maryland. It was now becoming more difficult for the Javitch family to personally supervise the operation of the expanding company.

In 1972, Nick Riso joined the company as Vice President of Sales and Operations. Nick assisted the Javitch family in bringing about their desired growth plan. A new merchandising effort began with the introduction of "Everyday Low Prices." This concept would begin a span of 29 consecutive years of record sales and earnings. In 1974, David Javitch died, and Lee established the David Javitch Memorial Scholarship Fund to benefit children of Giant/Martin's employees.

As the 1970s closed, 24 stores were in operation. Nick Riso was appointed President, and Lee Javitch assumed the position of Chairman. As the 1980s approached, the company had grown to a workforce of 3,400. 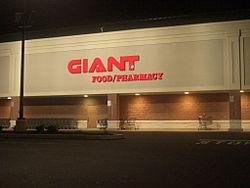 A Giant-Carlisle supermarket in Shillington, Pennsylvania.

In 1981, the Javitch family made a key decision to sell the company to Royal Ahold Corporation, a food retailing business based in Zaandam, the Netherlands. Ahold's roots date back to 1887, with the Albert Heijn grocery chain in the Netherlands serving as their anchor business. They are now a multi-faceted international company involved in the manufacturing and retailing of food and other consumer goods across the world. At the time of the agreement, Giant was operating 29 supermarkets.

Throughout the 1980s, Giant continued to grow. In 1988, Allan Noddle assumed the position of President of Giant Food Stores, as the 50th Giant store opened. Noddle served as a spokesman in Giant's radio and television advertising campaigns.

The late 1980s through the mid-1990s saw a complete modernization of Giant and Martin's stores as remodels, expansions, and interior upgrades were completed in virtually every store within the chain. In addition, many new customer conveniences were added including in-store banks, pharmacies, Chinese kitchens, coffee shops, photo processing, and dry cleaning services. By the end of 1996, Giant had grown to 75 stores. 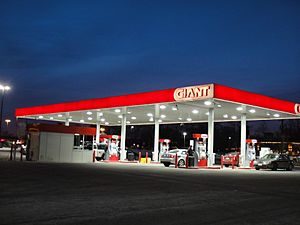 The new millennium brought about additional change within the organization, as Edwards transitioned to another Ahold-owned company, Stop & Shop. The Edwards stores throughout New Jersey and New York were remodeled and reopened under the Stop & Shop banner. With the major change, Giant concentrated on its plans to expand, and opened stores in new market areas such as Altoona, Pennsylvania.

In 2001, Giant formed an alliance with another Ahold company, Tops Markets, LLC in Buffalo, New York. The new partnership, called Shared Services, was designed to allow both companies to continue to operate individually as separate and distinct businesses while partnering to support corporate functions.

U-Scan self checkout registers were implemented company-wide, and a new marketing campaign, "Quality. Selection. Savings. Every Day" was introduced.

Major organizational change occurred in January 2003. Ultimately, Shared Services evolved to the extent that Tops was fully integrated into the Giant organization. The new structure resulted in many organizational changes that were consistent with Ahold's strategy of operating local food stores that are focused on meeting the needs of the customer. Through this integration, Giant and Tops shared each company's own strengths while maintaining local brands, resulting in increased long-term competitiveness and financial performance.

On October 12, 2005, Giant opened the doors on a new "Super Giant" in Camp Hill, Pennsylvania, in part due to competition from Wegmans supermarkets moving into the area. The new Giant offers more selections overall, particularly in the deli department, which is what Wegmans is known for. Another new Super Giant opened in Willow Grove, Pennsylvania on March 5, 2008 with a total area of 97,300 square feet (9,040 m2), making it Giant's largest store in Pennsylvania.

Giant Food Stores sponsors the Giant Center arena in Hershey, Pennsylvania as well as the Skyview at Hersheypark. They also sell Hersheypark tickets at a reduced price.

On September 6, 2006, Jack Clemens of Clemens Family Markets Inc. and his family sold 14 of their 22 stores to Royal Ahold, and eight to C&S Wholesalers. Thirteen of the Ahold stores were rebranded as Giant and one remained branded FoodSource (which was Clemens' upscale gourmet banner), while C&S immediately sold six of the stores to A&P, which re-branded them SuperFresh stores.

It was announced on December 17, 2009, that Giant-Carlisle would purchase the Ukrops chain, expanding their market further into Virginia.

On January 7, 2010, it was announced that Rick Herring would become the new President and CEO of Giant-Carlisle.

As of December 14, 2011, Giant and Martin's together have 92 gas stations and they have more than 180 stores in four states.

On January 5, 2012, Giant announced it would acquire 16 Genuardi's Family Markets across the Philadelphia area in a $106 million deal.

Martin's Food Markets is a chain of supermarkets operating in Maryland, West Virginia, Pennsylvania, and Virginia. They are operated by Giant-Carlisle and are owned by Royal Ahold, who also owns Stop & Shop and Giant of Landover supermarkets in the United States. The stores are generally identical to Giant of Carlisle stores.

In 1998, when Ahold purchased Giant-Landover, some Martin's stores were closed and sold to other chains to comply with Federal Trade Commission regulations. These locations included stores in Frederick, Carroll, Harford and Cecil counties in Maryland, where the Giant of Landover name was seen as more dominant.

The chain, along with Giant of Carlisle, implemented the Bonuscard program in 2000. Around that same time, the chain began selling gasoline in front of their stores.

The chain's slogan is "Quality. Selection. Savings. Everyday". "We're with You" was a previously used slogan. The majority of Martin's stores are open 24 hours, 7 days a week. Martin's is strong in its trade area, usually being first in market share.

The Martin's name originates from a small chain based in Hagerstown, Maryland. The Giant Food chain purchased Martin's while expanding in 1968. The name, once known only in Hagerstown, was expanded into nearby Waynesboro, Pennsylvania; Martinsburg, West Virginia; Frederick, Maryland; and Winchester, Virginia. The chain has since expanded further west into Maryland's Allegany County, into West Virginia's Jefferson and Mineral counties, into Virginia's Culpeper and Warren counties, and as far south as Petersburg, Virginia. The Martin's name was extended into west central Pennsylvania upon the purchase of corporately-owned Jubilee Foods stores, given the Martin's name in Pennsylvania instead of the Giant name to avoid confusion from their competitor in those markets, Pittsburgh-based Giant Eagle. Martin's now operates stores in Altoona, Duncansville, Connellsville, Indiana, and DuBois. 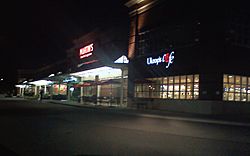 A former Ukrop's location converted to Martin's in Richmond, VA

Martin's is expanding into western Pennsylvania, with its first store in the Pittsburgh Metro area, located in Connellsville, and into central Virginia, with stores in Waynesboro and Staunton.

With the purchase of Ukrops Super Markets, Martin's moved even farther into central Virginia, with stores as far south as Petersburg and as far east as Williamsburg. Among the notable differences in the Richmond and Williamsburg stores are that they maintain the Ukrops recipes and brand in the bakery and prepared foods departments, and associates usually carry customers' groceries to their vehicles. These locations offer the Fuelperks branded fuel program instead of that offered at other Martin's stores.

Martin's Food Markets should not to be confused with Martin's Super Markets, based in South Bend, Indiana.

All content from Kiddle encyclopedia articles (including the article images and facts) can be freely used under Attribution-ShareAlike license, unless stated otherwise. Cite this article:
Giant-Carlisle Facts for Kids. Kiddle Encyclopedia.