Gibside is an estate in the Derwent Valley in North East England. It is between Rowlands Gill, Tyne and Wear and Burnopfield, County Durham, and a few miles from Newcastle-upon-Tyne. Gibside was previously owned by the Bowes-Lyon family. It is now a National Trust property. Gibside Hall, the main house on the estate, is now a shell, although the property is most famous for its chapel. The stables, walled garden, Column to Liberty and Banqueting House are also intact.

The Blakiston family acquired the estate by marriage in about 1540. Sir William Blakiston (1562–1641) replaced the old house with a spacious mansion between 1603 and 1620. Both the Royal (King James I of England) coat of arms and the Blakiston coat of arms are seen over the entrance of the old Hall. The Gibside property came into the possession of the Bowes family in 1713; a result of the marriage in 1693 of Sir William's great-granddaughter, Elizabeth Blakiston, to Sir William Bowes (1657–1707) of Streatlam Castle (now demolished).

Until 1722, the basis of the Bowes' influence was their own estate and house of Streatlam Castle, County Durham. However, after that date the acquisition through marriage of the Blakiston estate of Gibside gave the Bowes family an even greater influence in the north of the county and a share in the immense wealth that was to be acquired from the coal trade. The Blakiston estate included some of the area's richest coal seams.

In 1767 the granddaughter of Sir William Bowes – the "Bowes heiress" Mary Eleanor Bowes – married John Lyon, 9th Earl of Strathmore and Kinghorne, who changed his surname to Bowes due to a provision in her father's will that any suitor had to take the family name. This was a device to continue the Bowes lineage in the absence of a male heir. The estate remained in the Bowes and Bowes-Lyon family until the 20th century.

After the split inheritance dispute following the death of John Bowes, 10th Earl of Strathmore and Kinghorne in 1820, it belonged to his legitimated son John Bowes until his death in 1885 (he is buried in the Gibside chapel), when under the entail it reverted to his cousin the 13th Earl of Strathmore and Kinghorne. It had been the main residence of John Bowes' mother, Mary Milner, by then Dowager Countess of Strathmore, and her second husband, the politician Sir William Hutt (who had been John Bowes' tutor), until the latter's death in 1882, which was the last time it was permanently occupied by the family. 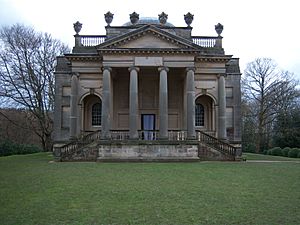 Gibside Chapel, at the end of a long avenue of trees.

Improvements to Gibside carried out by the Bowes-Lyon family in the 18th and early 19th centuries included landscaping, Gibside Chapel, built between 1760 and 1812, the Banqueting House, a column of Liberty, a substantial stable block, an avenue of oaks and several hundred acres of forest. The top floor of the main house was remodelled as a giant parapet, and the building was also extended to the side.

The chapel reflects the Calvinist leanings of the family, and though nominally Anglican, the interior is dominated by a huge and centrally placed "three-decker" pulpit. There is a house for the minister/chaplain nearby. Some holders of the position would not have been able to hold a Church of England parish living, on account of their views. The leading Palladian architect James Paine is attributed with most of the work of the 1750s and 1760s.

The Banqueting House, Gibside was built in 1746, and is an early example of Gothic Revival architecture, of the early form often called "Gothick". It has now been restored and is available for letting by the Landmark Trust, who now own it.

Gibside's main house is not the focal point of the estate: the long walk runs from the Column of Liberty to the chapel and the mansion is located to one side. Like the Orangery nearby it sits at the top of a steep slope leading to flat meadows and the river. Carriage drives thread through the estate, and the stable block, Banqueting House, and other buildings are all spread out along them. 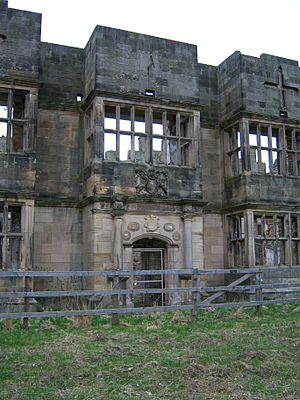 The front entrance to the house in 2010

A large monument, originally called the "Column of British Liberty", now usually just the "Column to Liberty", was begun in the 1750s by the hugely wealthy Sir George Bowes, reflecting his Whig politics. Set at the top of a steep hillock, the monument itself is a Doric order column, and topped by a standing bronze female figure, originally gilded, carrying a cap of liberty on a pole. Figures of "British Liberty", more often took the seated form of Britannia already very familiar from the British copper coinage, where Britannia had first appeared in 1672, with shield but carrying the cap on a rod as a liberty pole, in place of her usual trident.

The column forms the other end of a vista running to the chapel, along the avenue, then over some rougher ground. The monument can be seen from a considerable distance, from the slopes on the other side of the Derwent.

The Bowes-Lyon family had other major country houses, Glamis Castle in Scotland, and Streatlam Castle, County Durham, relatively close to Gibside. By the late 19th century, Gibside was hardly used, and gradually fell into disrepair, irrevocably so in the case of the main house.

The house became vacant in the 1920s after the Bowes-Lyon family sold some of its properties to pay death duties. The building was stripped of its fixtures and fittings, with many of the fireplaces and other items being transferred to Glamis Castle. Parts of the structure were demolished in 1958, including the removal of the roof. What remains is protected by Grade II* listed building status and included in the Heritage at Risk Register.

Parts of the grounds have been designated a Site of Special Scientific Interest, including a forest garden that is currently under restoration. Several buildings including the Palladian chapel and others are awaiting or undergoing restoration.

The chapel and Long Walk have been in the National Trust's ownership since 1965, and an additional 354 acres (1.43 km2) of the grounds were acquired in 1993. The Banqueting House has been in the ownership of the Landmark Trust since 1981, the building having been restored from a derelict shell. The stables now house a learning and discovery centre.

Women's Land Army girls were billeted at Gibside during World War I.

All content from Kiddle encyclopedia articles (including the article images and facts) can be freely used under Attribution-ShareAlike license, unless stated otherwise. Cite this article:
Gibside Facts for Kids. Kiddle Encyclopedia.