Glen Arbor Township is a civil township of Leelanau County in the U.S. state of Michigan. The population was 788 at the 2000 census. 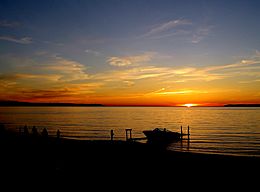 A sunset and South Manitou Island as seen from Glen Arbor 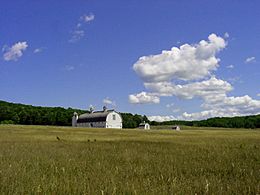 According to the United States Census Bureau, the township has a total area of 87.6 square miles (227 km2), of which 28.6 square miles (74 km2) is land and 59.0 square miles (153 km2) (67.34%) is water. It is located along the Sleeping Bear Dunes National Lakeshore, which was recently named the "Most Beautiful Place in America" by Good Morning America.

There were 377 households out of which 17.5% had children under the age of 18 living with them, 62.9% were married couples living together, 4.0% had a female householder with no husband present, and 31.8% were non-families. 30.0% of all households were made up of individuals and 14.1% had someone living alone who was 65 years of age or older. The average household size was 2.09 and the average family size was 2.56.

Glen Arbor is a popular tourist area for a few months during the summer when the local merchants and year-round inhabitants watch the population nearly triple. Residents of Detroit, Chicago, and many other parts of the Midwest travel to Northern Michigan to enjoy the warm weather and scenic beaches. Glen Arbor is situated on a small strip of land directly between Glen Lake and Lake Michigan which allows visitors to choose from two different bodies of water from which to waterski, fish, or sunbathe. The community sits in the middle of Sleeping Bear Dunes National Lakeshore, a federally protected park.

During the winter months, year-round inhabitants remain in the area to take advantage of outdoor winter sports. Both downhill skiing and cross-country skiing are popular pastimes along with hiking and hunting.

All content from Kiddle encyclopedia articles (including the article images and facts) can be freely used under Attribution-ShareAlike license, unless stated otherwise. Cite this article:
Glen Arbor Township, Michigan Facts for Kids. Kiddle Encyclopedia.