Gods Lake is a lake in northeastern Manitoba in Canada. The lake covers an area of 1,151 square kilometres (444 sq mi) with a net (water surface) area of 1,061 square kilometres (410 sq mi), making it the 7th largest lake in the province. It lies north of Island Lake at an elevation of 178 metres (584 ft), approximately 280 kilometres (174 mi) east of Thompson, Manitoba. It has a shore length of 474 kilometres (295 mi). It drains north via the Gods River and the Hayes River to Hudson Bay.

The area was featured in season 7 of the reality television series Ice Road Truckers. 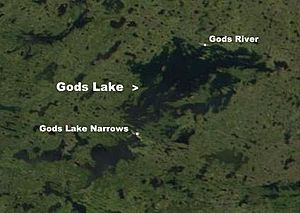 The First Nations communities of Gods Lake Narrows, Gods Lake (God's Lake 23), and Gods River are located on the shores of the lake.

At the mouth of Gods River on the northern end of the lake is the primary settlement of the Manto Sipi First Nation community of Gods River (God's River 86A) with 596 people.

All content from Kiddle encyclopedia articles (including the article images and facts) can be freely used under Attribution-ShareAlike license, unless stated otherwise. Cite this article:
Gods Lake Facts for Kids. Kiddle Encyclopedia.