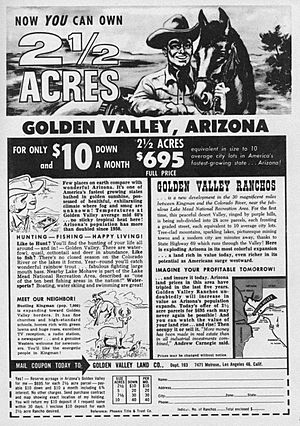 Golden Valley is a census-designated place (CDP) in Mohave County, Arizona, United States. The population was 8,801 at the 2020 census.

Because of its close proximity to Kingman, and its residents' reliance on Kingman's grocery and retail stores for everyday necessities, Golden Valley can be considered part of the Kingman community. However, residents of Golden Valley also rely on employment in Bullhead City and Laughlin, linking Golden Valley to those communities as well.

According to the United States Census Bureau, the CDP has a total area (28x10 miles) of 280 square miles (730 km2), all of it land. However, the community that is considered to be Golden Valley covers a larger area than the CDP defined by the Census Bureau.

There were 1,822 households, out of which 23.3% had children under the age of 18 living with them, 57.1% were married couples living together, 9.1% had a female householder with no husband present, and 29.3% were non-families. 22.6% of all households were made up of individuals, and 9.1% had someone living alone who was 65 years of age or older. The average household size was 2.48 and the average family size was 2.87.

On July 30, 2010, three inmates, two incarcerated for murders, one for attempted homicides, escaped from the facility. One was recaptured in western Colorado on August 1, after a shootout with a Garfield County deputy and city police in Rifle, Colorado. A second was recaptured by U.S. Marshals on August 9 in Meeteetse, Wyoming. The third escapee and his accomplice cousin were captured near Springerville on August 19, 2010, also by U.S. Marshals, in an east-central Arizona, White Mountains, U.S. Forest Service campground.

On July 1st, 2nd and 4th, riots broke out once again at the Arizona State Prison-Kingman, at Golden Valley, which had "a long history of problems." Nine guards and seven inmates were injured, and the state brought in 96 members of its special tactical unit to quell the disturbances.

In August 2015, Arizona governor Doug Ducey terminated the contract with MTC after an Arizona Department of Corrections investigative report revealed the company had "a culture of disorganization, disengagement, and disregard" of DOC policies.

The Arizona State Prison – Kingman has an address that says it is in Golden Valley. When it was being sold to the residents of Golden Valley it was promised it would be a prison for DUI offenders only. Due to control of the inmate population problems the contract for the prison has changed hands since its opening. It is a for-profit prison operated by GEO Group under contract to hold inmates for the Arizona Department of Corrections.

All content from Kiddle encyclopedia articles (including the article images and facts) can be freely used under Attribution-ShareAlike license, unless stated otherwise. Cite this article:
Golden Valley, Arizona Facts for Kids. Kiddle Encyclopedia.