Gore Mountain is a mountain located near the village of North Creek in Warren County, New York, of which its peak is the highest point. Gore is flanked to the north by South Mountain, and to the southwest by Height of Land Mountain. The mountain is the site of the popular Gore Mountain ski resort.

Gore mountain gets its name from the word "gore", a tract of land, typically triangular, characteristically arising from survey lines that do not close. The mountain remained unsurveyed during early settlement of the Adirondack Mountain region because it was considered valueless to early farmers and loggers. It was considered too high and steep for farming and horse drawn logging. It remained a "gore" and the name stuck as Gore Mountain. 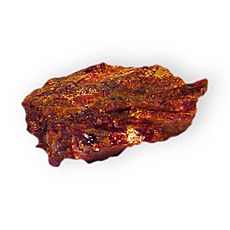 Industrial garnet has been mined at the Barton garnet mine since 1878 when Henry Hudson Barton began mining garnet for use as sandpaper abrasives.

All content from Kiddle encyclopedia articles (including the article images and facts) can be freely used under Attribution-ShareAlike license, unless stated otherwise. Cite this article:
Gore Mountain (New York) Facts for Kids. Kiddle Encyclopedia.