Gothenburg is a city in Dawson County, Nebraska, United States. It is part of the Lexington, Nebraska Micropolitan Statistical Area. The population was 3,574 at the 2010 census.

Gothenburg was founded in 1882 by Olof Bergstrom. After coming to America from Sweden in 1881, Bergstrom worked for a time on the Union Pacific Railroad, then homesteaded in Dawson County near Gothenburg. He eventually became a land agent for the UP. Bergstrom selected the site that was to become Gothenburg and located a farmstead about a mile north. The Union Pacific Railroad laid out the original town of eight blocks parallel to the railroad tracks. Bergstrom made several return trips to Sweden to lead groups of settlers to Dawson County. 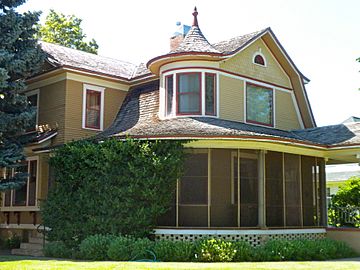 Ernest A. Calling House at 1514 Lake Avenue is listed on the National Register of Historic Places 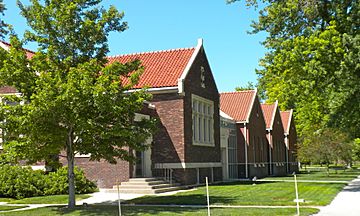 All content from Kiddle encyclopedia articles (including the article images and facts) can be freely used under Attribution-ShareAlike license, unless stated otherwise. Cite this article:
Gothenburg, Nebraska Facts for Kids. Kiddle Encyclopedia.