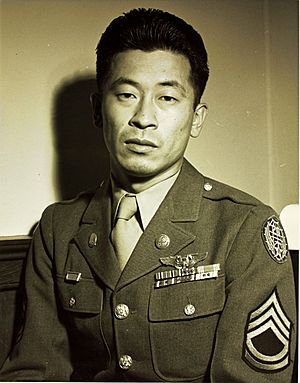 Ben Kuroki (May 16, 1917 – September 1, 2015) was an American Air Force gunner. He was the first Nisei (son of Japanese immigrants) to serve in the Pacific Ocean theater of World War II. He served in a total of 58 combat missions during World War II. For his services to his country from 1941 until 1946, he was awarded three Distinguished Flying Crosses, one Distinguished Service Medal, and five Air Medals with oak leaf clusters.

Kuroki was born in Gothenburg, Nebraska and grew up in Hershey, Nebraska. His parents were Japanese immigrants, and was one of 10 children. Kuroki was married to Shige and had three daughters.

All content from Kiddle encyclopedia articles (including the article images and facts) can be freely used under Attribution-ShareAlike license, unless stated otherwise. Cite this article:
Ben Kuroki Facts for Kids. Kiddle Encyclopedia.