Government of Florida facts for kids

The executive branch of the government of Florida consists of the Governor, Lieutenant Governor, Florida Cabinet (which includes the Attorney General, Commissioner of Agriculture and Chief Financial Officer), and several executive departments. Each office term is limited for two four-year terms.

The Governor of Florida is the chief executive of the government of Florida and the chief administrative officer of the state responsible for the planning and budgeting for the state, and serves as chair when the Governor and the Florida Cabinet sit as a decision-making body in various constitutional roles. The Governor has the power to execute Florida's laws and to call out the state militia to preserve the public peace, being Commander-in-Chief of the state's military forces that are not in active service of the United States. At least once every legislative session, the Governor is required to deliver the "State of the State Address" to the Florida Legislature regarding the condition and operation of the state government and to suggest new legislation. 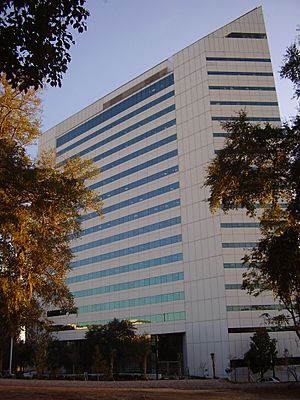 The Turlington Building in Tallahassee, headquarters of the Department of Education

Florida is unique among U.S. states in having a strong cabinet-style government. Members of the Florida Cabinet are independently elected, and have equal footing with the Governor on issues under the Cabinet's jurisdiction. The Cabinet consists of the Attorney General, the Commissioner of Agriculture and the Chief Financial Officer. Along with the Governor, each member carries one vote in the decision making process. In the event of a tie, the side of the Governor is the prevailing side. Cabinet elections are held every four years, on even numbered years not divisible by four (such as 2010, 2014, etc.).

The purpose of agencies is to promulgate rules to implement legislation. In April 2014, there were 25,362 administrative rules, and eight agencies have over 1,000 rules each, of which the most heavily regulated agencies are the Department of Financial Services and Department of Health. The Florida Administrative Register (FAR) is the daily publication containing proposed rules and notices of state agencies. The regulations are codified in the Florida Administrative Code (FAC). There are also numerous decisions, opinions and rulings of state agencies.

The commissioners charged by the government of the unified Florida to select a permanent capital selected Tallahassee, then between the two major cities of Florida, Pensacola and Saint Augustine, as the state capital, in 1823. The White people expelled the Native Americans, who were opposed to leaving their land, before settling Tallahassee. The commissioners were Dr. W.H. Simmons, from St. Augustine, and John Lee Williams, from Pensacola. Richard Keith Call and a founder of Jacksonville, John Bellamy, wanted the capital in what is now Lake County but their efforts failed.

From the beginning of Tallahassee's history there were multiple attempts to move the state capital. A July 1957 Florida Historical Quarterly article stated that this was because of Tallahassee's distance from other settlements.

As Florida's size and population grew and spread south, the center of the state's population and the geographic center of the state changed. Using data from the 2010 U.S. Census, according to the Florida Bureau of Economic and Business Research, the state's center of population was southern Polk County. The geographic center of the state is Brooksville. Because Tallahassee became increasingly far from many Floridians, there were additional proposals to move the capital to Orlando, a more centrally-located city, in the late 1960s. The City of Orlando, in 1967, passed a referendum stating that it would accept becoming the capital. These proposals stopped after the new Florida Capitol opened in Tallahassee in 1977. Politicians from North Florida had opposed the idea of moving the state capital. Adam C. Smith of the Tampa Bay Times argued in 2016 that Tallahassee is no longer an appropriate location for the capital, and he cited an American Economic Review article which stated that state capitals far from their populations are more prone to corruption than those that are not.

All content from Kiddle encyclopedia articles (including the article images and facts) can be freely used under Attribution-ShareAlike license, unless stated otherwise. Cite this article:
Government of Florida Facts for Kids. Kiddle Encyclopedia.