Government of Massachusetts facts for kids 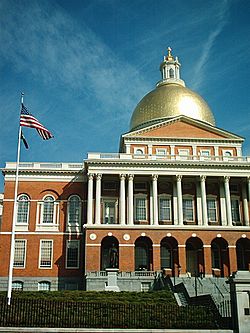 The Massachusetts State House in Boston

The form of Massachusetts government is provided by the Constitution of the Commonwealth. The legislative power is exercised by the bicameral General Court, composed of the Senate and House of Representatives. The executive power generally is exercised by the Governor, along with other independently elected officers, the Attorney General, Secretary of the Commonwealth, and Auditor. The judicial power is reposed in the Supreme Judicial Court, which superintends the entire system of courts. Cities and towns also act through local governmental bodies that possess only the authority granted to them by the Commonwealth over local issues, including limited home rule authority. Most county governments were abolished in the 1990s and 2000s, although a handful remain.

The capital of Massachusetts is Boston. The seat of power is Beacon Hill, which is home to the legislative and executive branches. The Supreme Judicial Court occupies nearby Pemberton Hill.

Other elected officials are:

Some executive agencies are delegated by the legislature with the responsibility of formulating regulations by following a prescribed procedure. Most of these are collected in the Code of Massachusetts Regulations.

The governor has a cabinet of ten secretaries. In general, they supervise the state agencies which are under the direct control of the governor. Eight of the secretaries preside over the "Executive Office of" their respective areas.

The state has an Open Meeting Law, enforced by the Attorney General, and a Public Records Law, enforced by the Secretary of the Commonwealth. A 2008 report by the Better Government Association and National Freedom of Information Coalition ranked Massachusetts 43rd out of 50 states for government transparency, and gave it a failing grade of "F" taking into account time, cost, and comprehensiveness of access to public records. Access to government records and the actions of the Secretary in enforcing the law became an issue in the 2014 campaign for the office. Incumbent William Galvin cited his previous requests that the legislature revise the Public Records Law to make access easier. The governor claims to be exempt from the Public Records Law.

A reform law was signed on June 3, 2016, which will take effect on January 1, 2017, putting stricter limits on time and reducing costs.

All content from Kiddle encyclopedia articles (including the article images and facts) can be freely used under Attribution-ShareAlike license, unless stated otherwise. Cite this article:
Government of Massachusetts Facts for Kids. Kiddle Encyclopedia.