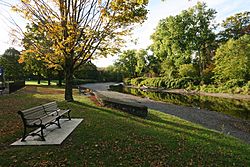 The Green River is a tributary of the Deerfield River in southern Vermont and northwestern Massachusetts in the United States.

The Green River had an influential role in the settlement and economic growth of the towns in its watershed. Greenfield, Massachusetts, where the river ends, got its name from the Green River. The largest water user of the Green River is the Greenfield Water Department which draws 2.12 million gallons of water per day through a combination of surface and groundwater sources.

The Green River begins in Marlboro, Vermont, then goes east through Halifax, then Guilford, where it turns south into Massachusetts. It continues south and acts as the border for Colrain and Leyden. In total it runs 31.5 miles (50.7 km), 14.8 in Vermont and 16.7 in Massachusetts. It runs into the Deerfield River which then runs just under two miles into the Connecticut River.

Land use in the Massachusetts portion of the river (52.6 square miles) consists of 65% forest, 13% Agricultural, and 11% residential. The majority of the residential area is in Greenfield. The total drainage of the Green River sub-watershed is 89.8 square miles. Interstate 91 is the only highway to cross over it.

Overall Green River has been classified as a Class A public water supply and coldwater fishery.

Northern Redbelly Dace were first discovered in the Green River sub-watershed in 1940. They represent the only known population of the species in Massachusetts. Also on a few occasions Atlantic Salmon and American Eels have been found in the sub-watershed while spawning.

The river has a number of environmental issues. Most of the pollution comes from the last 3.7 miles of the river located primarily in Greenfield, Massachusetts. This has been due to fecal coliform, lack of riparian zones, and one dam in disrepair. The fecal problem can be linked to two sources: manured farmland, and sewage leakage in commercial Greenfield.

The biggest recreation attraction on the Green River is the Green River Swimming & Recreation Area. The recreation area was given to the town in two parts by a private owner, one part in 1929 and the other part in 1933. The area is 22 acres and is located on Nash's Mill Road in Greenfield, Massachusetts, west of downtown. This part of the river has a dam that is raised during the day to make the river into a temporary pool.

All content from Kiddle encyclopedia articles (including the article images and facts) can be freely used under Attribution-ShareAlike license, unless stated otherwise. Cite this article:
Green River (Deerfield River tributary) Facts for Kids. Kiddle Encyclopedia.