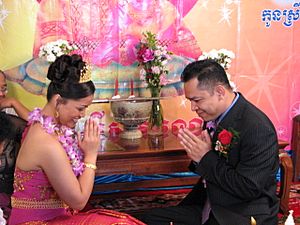 Greetings are nice things to say when people meet each other. Greetings may be different from culture to culture. These are some greetings used a lot in the English language:

There are also ways to greet without talking, such as these:

All content from Kiddle encyclopedia articles (including the article images and facts) can be freely used under Attribution-ShareAlike license, unless stated otherwise. Cite this article:
Greeting Facts for Kids. Kiddle Encyclopedia.