The Griesmer site (La-3) is located on the Kankakee River in Lake County, Indiana, about a mile southeast of Schneider, in Northwestern Indiana. It is classified as a Prehistoric, multi-component site with Middle Woodland (c. 100 B.C-500 A.D.), Late Woodland (c. 500 A.D.-1500 A.D.) and Upper Mississippian (c. 1000-1500 A. D.) occupations. The deposits were not stratified, but observation of the types of artifacts present, together with radiocarbon dates, helped to define the sequence of occupations at the site.

The site was excavated under the auspices of the Indiana Historical Society in 1962. Five years later, the site was completely destroyed by sand removal activities.

Except for a hearth feature, all of the features were associated with the Upper Mississippian occupation. The following types of features were reported:

A total of 94 post molds were noted, and their placement indicated the presence of at least 2 structures.

Over 4,700 animal bones and 8,193 mussel shells were recovered. The most common types of animal remains were turtle, deer, elk and fish.

Artifacts recovered from the site included:

The non-pottery artifacts found at an archaeological site can provide useful cultural context as well as a glimpse into the domestic tasks performed at a site; ceremonial or religious activities; recreational activities; and clothing or personal adornment.

Some of the most prominent and diagnostic non-pottery artifacts are presented here in more detail:

There was a small Middle Woodland component discovered at the site. Most of the pottery from this component was of the type Havana Ware (also known as Goodall Focus). The Havana Culture was thought to be a local variant of the main Middle Woodland, which was dominated by the Adena and Hopewell cultures of the Mississippi and Ohio River Valleys. Middle Woodland cultures are characterized by their large burial mounds, some of which are still visible today; as well as their distinctive pottery forms, ceremonial practices, agricultural activities, and widespread trade networks.

The Late Woodland period in the Great Lakes region was characterized by the introduction of maize agriculture, which allowed for more efficient food production. In turn, this led to population increases and this led in turn to increased competition for resources, resulting in more conflict/warfare.

There were a few potsherds which indicated the presence of Late Woodland peoples / cultures at some point. This could have been at any time from the end of the Middle Woodland (c. A.D. 500) to European contact (after 1600 A.D.).

The Upper Mississippian occupation is the main component at the Griesmer site. Two radiocarbon dates of A.D. 1520 and A.D. 1530 indicate this site was occupied slightly before European contact.

The Fisher and Huber pottery types are the most common encountered during the Griesmer excavations. Fisher and Huber are either considered foci of the Oneota complex by archaeologists, or closely related to Oneota. Charles Faulkner in 1972 developed a typology of pottery descriptions for these two types based on specimens from the Griesmer site and comparisons with other nearby sites with similar pottery. 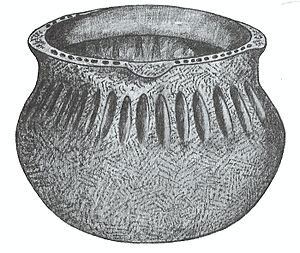 Fisher Ware was first described at the Fisher Mound site in northeastern Illinois near the mouth of the Illinois River. It has also been noted at the Anker and Boumanville sites near Chicago, Illinois, and the Fifield site in Indiana.

Two specific types of Fisher ware were identified at Griesmer and described by Faulkner: 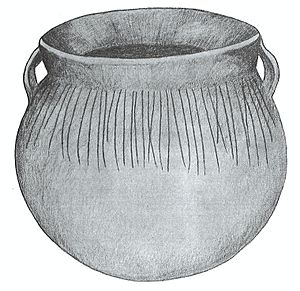 Huber Ware is common at the Huber, Anker, Oak Forest and Hoxie Farm sites near Chicago, Illinois; and at Moccasin Bluff and Schwerdt in southwestern Michigan where it is part of the Berrien Phase. At the Oak Forest site, this ware has been associated with early Historic artifacts, which indicates the pottery was still being made at the time of European contact. The exact cultural affiliation has not been determined but it has been suggested that the makers of this pottery may be the Miami or Potawatomi tribe.

This pottery is characterized by shell tempering, predominantly smooth surfaces either plain or decorated by fine vertical incised lines, excurved or flared rims, and often fine notching on the lip. Strap handles or loops are present on some vessels. Some of the Upper Mississippian vessels found at Griesmer are identified as coranders based on sherds with holes in them. Coranders are a very rare vessel form in the area. Most of these sherds came from Huber ware. Miniature vessels are also present at Griesmer, and most of them appear to be Huber ware as well.

Four specific types of Huber ware were identified at Griesmer:

The Griesmer site is a multi-component Prehistoric site with the large Upper Mississippian occupation being the most prominent. The Fisher and Huber pottery, along with the radiocarbon dates, indicate the site was occupied almost to the time of European contact. The excavators felt that the season of occupation was late spring to early summer, and that the site was a short-term encampment instead of a permanent agricultural village. A similar short-term encampment has been identified at the Schwerdt site on the Kalamazoo River in southwestern Michigan. Schwerdt had similar deep roasting pits with water lily tubers present along with sturgeon bone. The ceramics at Schwerdt were designated as Berrien Phase; including shell-tempered pottery which can be assigned to Huber ware, along with grit-tempered local Late Woodland types.

Unfortunately it cannot be said with confidence which cultural or tribal entities created the Fisher and Huber pottery at Griesmer, but the Potawatomi and Miami have been suggested, based on the fact that both of these tribes were present in the area during early Historic times.

All content from Kiddle encyclopedia articles (including the article images and facts) can be freely used under Attribution-ShareAlike license, unless stated otherwise. Cite this article:
Griesmer Site Facts for Kids. Kiddle Encyclopedia.