The Moccasin Bluff Site (also designated 20BE8) is an archaeological site located along Red Bud Trail and the St. Joseph River north of Buchanan, Michigan. It was listed on the National Register of Historic Places in 1977, and has been classified as a multi-component Prehistoric site with the major component dating to the Late Woodland/Upper Mississippian period.

The terrace between Moccasin Bluff and the St. Joseph River was home to temporary camps as early as 6300 B.C. Around A.D 500, inhabitants here traded with other groups of Native Americans from Illinois and Indiana. By A.D. 1100-1400, more permanent villages were established here, and the residents farmed the local lands.

By the late 1820s, European settlers moved into the area to log and farm the land. The US government then adopted a policy of moving the local Potawatomi out of the area and further west. This bluff is said to be named for Cogomoccasin, leader of one of the nearby displaced Potawatomi villages.

In 1948, the site was excavated by a University of Michigan team, which found pottery, burials and remnants of maize and storage pits. In 2002, Michigan State University excavated a wetland area at a lower elevation that had not been previously examined.

The Moccasin Bluff Site is located on a terrace along Red Bud Trail. The terrace overlooks a wide bend in the St. Joseph River containing a pair of islands. The site is protected by a half-circle of hills to the north, west and south.

The site is significant in being one of the few Prehistoric sites in western Michigan showing evidence of intensive occupation over a long time period. This has resulted in a rich midden which yields a large quantity of artifacts. The deposits are not stratified, but the artifacts themselves, supported by radiocarbon dates and comparison to other sites, are diagnostic of several periods of Native American prehistory, ranging from c. 8500 BC to the 1600s A.D. or just prior to European contact. The Archaic (c. 8500-1500 BC), Early Woodland (c. 1500-100 BC) and Middle Woodland (c. 100BC-500 AD) are represented based on the types of artifacts recovered. However, the main occupation was in the Late Woodland period (c. 500-1500 AD) with evidence of Upper Mississippian (c. 1000-1500 AD) occupation and/or influence as well.

There were no trace of dwellings found at the site. Nor were there post molds that might have indicated the presence of structures. The researchers concluded that the lack of structural features may be due to the fact that the main part of the site was destroyed during the construction of the Red Bud Trail Highway.

Four feature types were identified; storage pits (62), fire pits (17), hearths (19) and smudge pits (2). Three burials were located, of which only one was fully excavated.

The fire pits may have functioned as earth ovens for the roasting of the white water lily tuber. No trace of the tubers were found at the site, but in similar pits at the Griesmer site in northwest Indiana the carbonized remains of white water lily tuber were identified; and at the Schwerdt Site on the Kalamazoo River in Michigan, the carbonized tubers of a similar water-lily species, American Lotus, were found in deep roasting pits.

Both smudge pits contained the carbonized remains of maize. The contents were analyzed and it was determined to be Eastern Complex maize. Based on previous ethnographic observation, the researchers concluded the features were used as a smudge to cure hides.

The remains of 32 species were present at Moccasin Bluff. However when the remains were analyzed to assign pounds of meat present of each species, the results were 32% deer, 27% elk, 8% sturgeon, 6% beaver, 5% bear and 2% dog. These bones were not modified into tools like the bone tools described in the Artifacts section below, and may be considered food remains or, in the case of the dog and bear, possibly the remains of ceremonial activities. Dog sacrifice and dog meat consumption was observed to have ceremonial and religious implications in early Native American tribes. Bear worship and ceremonialism has also been recorded in the ethnological record. 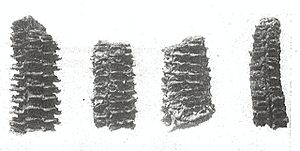 Charred 8-rowed maize cobs from one of the smudge pits

Specimens of wood charcoal from the fire pits were analyzed and found to be primarily oak, hickory and maple, reflecting the makeup of the local deciduous forest. Some carbonized food remains were identified as acorn, walnut, Canadian plum, butternut and hickory nut. Eastern complex maize was present in the two smudge pits.

The following types of artifacts were recovered from the site:

The non-pottery artifacts found at an archaeological site can provide useful cultural context as well as a glimpse into the domestic tasks performed at a site; ceremonial or religious activities; recreational activities; and clothing or personal adornment.

Some of the most prominent and diagnostic non-pottery artifacts are presented here in more detail:

Archaeologists often find pottery to be a very useful tool in analyzing a prehistoric culture. It is usually very plentiful at a site and the details of manufacture and decoration are very sensitive indicators of time, space and culture.

A total of 20 vessels of Havana Ware pottery was collected in the 1948 excavations. The Havana Culture was thought to be a local variant of the main Middle Woodland, which was dominated by the Adena and Hopewell cultures of the Mississippi and Ohio River Valleys. Middle Woodland cultures are characterized by their large burial mounds, some of which are still visible today; as well as their distinctive pottery forms, ceremonial practices, agricultural activities, and widespread trade networks.

The Late Woodland period in the Great Lakes region was characterized by the introduction of maize agriculture, which allowed for more efficient food production. This led to population increases which in turn led to increased competition for resources, resulting in more conflict/warfare. After 1000 AD, there was increased interaction and influence from the Mississippian cultures of the Mississippi River Valley, resulting in the formation of Upper Mississippian cultures in the Great Lakes area. 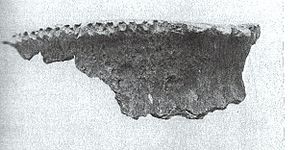 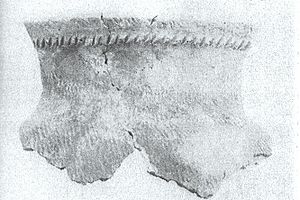 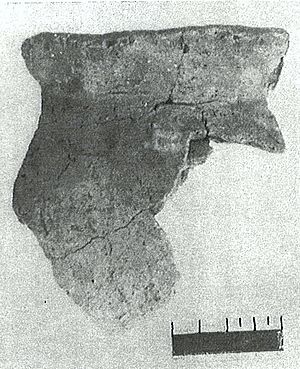 Moccasin Bluff Ware is divided into several types, some of which have variants, groups and sub-groups: 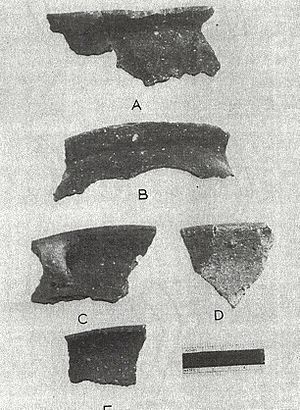 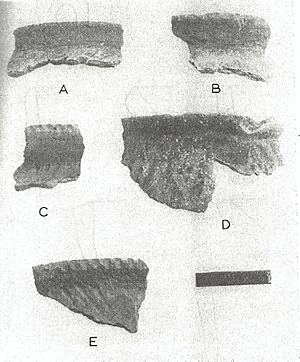 The shell-tempered Berrien Ware present at the site is divided into 5 subgroups based on shoulder, neck, surface finish and rim and lip attributes, and can be typed according to 2 previously recognized Upper Mississippian cultures:

The large quantity of pottery collected at the Moccasin Bluff site, in conjunction with comparisons with other sites, enabled the authors of the site report to propose a chronological history of Late Woodland cultures in the western Michigan / northwest Indiana region.

The Berrien Phase terminates with the end of Prehistory and the beginning of the Historic period. The authors of the site report hypothesize that Berrien-Huber ware may be associated with the historic Miami tribe; the Moccasin Bluff Scalloped with an Algonquian-speaking tribe such as the Potawatomi; and the Moccasin Bluff Notched Applique Strip with Ohio tribes who may have been displaced during the Iroquois Wars. Based on the fact that Michigan was traditionally considered the homeland of the Potawatomi, other researchers have also suggested that the Berrien Phase represents the material culture of the Potawatomi tribe.

Notably, there are no European trade goods present in the Berrien Phase at Moccasin Bluff. Therefore the site was abandoned at or just before the time of European contact. The same may be said for the Berrien Phase component at the nearby Schwerdt site. The reason for this may be that in the Protohistoric or early Historic period the Potawatomi were displaced from western Michigan as a result of the Iroquois Wars and moved to the west shore of Lake Michigan into Wisconsin. The Rock Island II Site on Rock Island in Green Bay, northern Lake Michigan in Wisconsin is a good example of a Potawatomi village in this early Historic period. As a result, the lower peninsula of Michigan became a "no-mans land", mostly unoccupied for several decades.

The 2002 excavations used the flotation technique to recover small plant remains, a practice that was not used in earlier times. As a result, numerous small seeds and fruit seeds were recovered. Of the fruits, pin cherry, pokeberry, grape and blackberry/raspberry were present. Of the seeds, several indigenous starchy and oily seed were recovered, including goosefoot, maygrass, knotweed, amaranth, sumpweed, and sunflower. These seeds are part of the Eastern Agricultural Complex, a group of cultivated or semi-cultivated plants utilized by the Prehistoric populations in addition to the better-known crops such as maize, beans and squash. These types of small seeds are not likely to be recovered unless flotation is used, which is why they were underreported and largely unknown until flotation sampling became widespread among archaeologists.

The data recovered from the Moccasin Bluff site shows many indications that the site was occupied for most or all of the year:

Based on evidence from the excavations, combined with evidence from the early Historic Native American tribes, it was concluded that the Moccasin Bluff site represented a permanent or semi-permanent site, with other sites such as Schwerdt serving as temporary encampments to exploit seasonal resources. There are no structures reported from Moccasin Bluff, but the researchers felt that the part of the site containing the houses was destroyed in the building of a highway through the area.

The 2002 excavations found no additional evidence of maize and still no evidence of structures, and some archaeologists are re-thinking the agricultural village interpretation. Since there is a lack of known Late Woodland or Upper Mississippian protohistoric agricultural village sites elsewhere in western Michigan, some researchers are suggesting that perhaps the subsistence pattern was not heavily focused on maize cultivation as was originally thought. Instead, the adaptation of the Berrien Phase population may have been more balanced between hunting, fishing, gathering and limited cultivation of Eastern Agricultural Complex seeds as well as maize.

All content from Kiddle encyclopedia articles (including the article images and facts) can be freely used under Attribution-ShareAlike license, unless stated otherwise. Cite this article:
Moccasin Bluff Site Facts for Kids. Kiddle Encyclopedia.