Phytolacca americana, also known as American pokeweed, pokeweed, poke sallet, dragonberries is a poisonous, herbaceous perennial plant in the pokeweed family Phytolaccaceae growing up to 8 ft (2.4m) in height. It has simple leaves on green to red or purplish stems and a large white taproot. The flowers are green to white, followed by purple to almost black berries which are a food source for songbirds such as gray catbird, northern mockingbird, northern cardinal, and brown thrasher, as well as other birds and some small animals (i.e., to species that are unaffected by its mammalian toxins).

Pokeweed is native to eastern North America, the Midwest, and the Gulf Coast, with more scattered populations in the far West. It is also naturalized in parts of Europe and Asia. It is considered a pest species by farmers. Pokeweed is poisonous to humans, dogs, and livestock. In early spring, shoots and leaves (not the root) are edible with proper cooking, but they later become deadly, and the berries are also poisonous. It is used as an ornamental in horticulture, and it provokes interest for the variety of its natural products (toxins and other classes), for its ecological role, its historical role in traditional medicine, and for some utility in biomedical research (e.g., in studies of pokeweed mitogen). In the wild, it is easily found growing in pastures, recently cleared areas, and woodland openings, edge habitats such as along fencerows, and in wastelands. 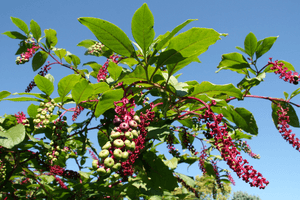 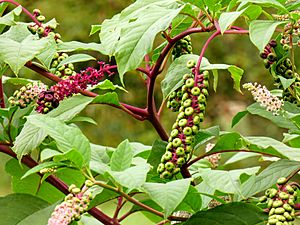 Pokeweed is a member of the family Phytolaccaceae, and is a large native herbaceous perennial plant, growing up to 2.5m (8 feet) in height over the course of a summer. One to several branches grow from the crown of a thick, white, fleshy taproot, each a "stout, smooth, green to somewhat purplish stem;" with simple, entire leaves with long petioles alternately arranged along the stem.

Pokeweeds reproduce only by their large, glossy black, lens-shaped seeds, which are contained in a fleshy, 10-celled, purple-to-near-black berry that has crimson juice. The flowers are perfect, radially symmetric, white or green, with 4-5 sepals and no petals. The flowers develop in elongated clusters termed racemes. The seeds have long viability, able to germinate after many years in the soil.

Birds are unaffected by the poisons in the berries (see below), and eat them, dispersing the seeds. Seed are also found in commercial seed (e.g., vegetable seed packets). The berries are reported to be a good food source for songbirds and other bird species and small animals that are unaffected by its toxins. Distribution via birds is thought to account for the appearance of isolated plants in areas otherwise free from pokeweed.

All parts of the plant can be toxic and pose risks to human and mammalian health. Toxins are found in highest concentration in the rootstock, then leaves and stems, then the ripe fruit. The plant generally gets more toxic with maturity, with the exception of the berries, which are dangerous even while green.

Children may be attracted by clusters of berries. Ohio Agricultural Research and Development Center (OARDC) note that

Children are most frequently poisoned by eating raw berries. Infants are especially sensitive and have died from eating only a few raw berries. Adults have been poisoned, sometimes fatally, by eating improperly prepared leaves and shoots, especially if part of the root is harvested with the shoot, and by mistaking the root for an edible tuber. Research with humans has also shown that common pokeweed can cause mutations (possibly leading to cancer) and birth defects. Since the juice of pokeweed can be absorbed through the skin, contact of plant parts with bare skin should be avoided.

Pokeweed is to be avoided during pregnancy and children consuming even one berry may require emergency treatment. The plant sap can cause dermatitis in sensitive people.

If death occurs, it is usually due to respiratory paralysis.

Pokeweed poisoning was common in eastern North America during the 19th century, especially from the use of tinctures as antirheumatic preparations and from ingestion of berries and roots that were mistaken for parsnip, Jerusalem artichoke, or horseradish.

Pokeweed is used as a sometime food source by the larvae of some Lepidoptera species, including the giant leopard moth (Hypercompe scribonia).

Some pokeweeds are grown as ornamental plants, mainly for their attractive berries. A number of cultivars have been selected for larger fruit panicles. 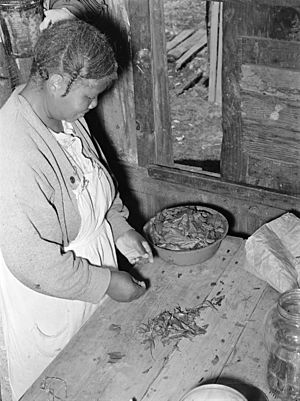 Poke is a traditional southern Appalachian food. The leaves and stems of young plants can be eaten, but must be cooked by boiling two or more times with the water drained and replaced each time. The leaves taste similar to spinach; the stems, similar to asparagus. A typical recipe is to remove the leaves from the young plant, rinse them in cool water, bring the leaves to a rolling boil in a large pot for about 20 minutes, discard the cooking water, rinse them in cool water, repeat the boiling and the rinsing at least two more times, panfry the leaves in bacon grease for two minutes, add bacon, and salt and pepper to taste.

The roots are poisonous, as are mature leaves and stems. A late 19th century herbal, the King's American Dispensatory, describes various folk medical uses that led individuals to ingest pokeberry products. Some festivals still celebrate the plant's use in its historical food preparations.

As late as the 1990s two companies commercially canned and sold pokeweed, but in 2000 the last one, the Allen Canning Company of Siloam Springs, Arkansas, closed down its operation.

Plant toxins from Phytolacca are being explored as a means to control zebra mussels.

The toxic extract of ripe pokeweed berries can be processed to yield a pink dye.

During the middle of the 19th century wine often was coloured with juice from pokeberries.

As shown in the sidebar, a 100g serving of pokeweed contains 20 calories and 3.1 grams of carbohydrates, 1.6 grams of sugars, 1.5 grams of dietary fiber, 0.4 grams of fat, 2.3 grams of protein, and is a rich source of vitamin A, vitamin B2, vitamin C, vitamin K, and manganese. It contains low levels of vitamin B1, vitamin B6, iron, calcium, magnesium, phosphorus, and potassium.

A 1969 hit written and performed Tony Joe White, "Polk Salad Annie", is about poke sallet, the cooked greens-like dish made from pokeweed. The lyrics include:

And in the fields looks somethin' like a turnip green
And everybody calls it polk salad, polk salad

Poke salad festivals are held annually in several small southern towns, though often these celebrations are only remotely related to the plant as food or medicine (see and individual festival references below). Locations include:

In Oklahoma, poke salad may be added to the annual wild onion dinners.

All content from Kiddle encyclopedia articles (including the article images and facts) can be freely used under Attribution-ShareAlike license, unless stated otherwise. Cite this article:
American pokeweed Facts for Kids. Kiddle Encyclopedia.