Grizzly Tales for Gruesome Kids is a British animated television series based on the generic trademarked children's book series of the same name by Jamie Rix. After the first three books were published from 1990 to 1996, Carlton Television adapted the short stories into ten-minute cartoons for ITV, produced by themselves, Honeycomb Animation, and Rix's production company, Elephant Productions. It aired on CITV between January 2000 and October 2006 with six series and 78 episodes, as well as a New Year's Eve special that was over 20 minutes longer than other episodes. The series returned in a new format for NickToons UK with 26 episodes split into two series under the name Grizzly Tales (also known as Grizzly Tales: Cautionary Tales for Lovers of Squeam!), which aired between May 2011 and November 2012.

Each episode had a framing device set in an old cinema (named The Squeam Screen) with its creepy caretaker and his spider companion, Spindleshanks. The adapted stories are short movies on film reels that the caretaker screens from the projector into the theatre, after he finishes talking to the audience about morals and proverbs that will later relate to the story of that episode, as he bullied Spindleshanks through malicious pranks and cowardice. These were an invention from Planer, who suggested that the adapted stories should have consistency. These scenes are animated with Claymation whereas the adapted stories from the books were traditionally animated, then later animated in Adobe Flash. 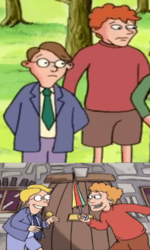 Episodes were faithful to the original story, however, there were some minor changes. For example, the Cluck family in the eponymous story "The Dumb Clucks" were renamed the Klutz family, and the title was expectantly adjusted. Other notable changes included the use of character models that were constantly reused in many episodes either with minor adjustments or not, alternating between main and background characters: the character model for Dorothy May Piranha from "The Piranha Sisters" is the same "actress" who was Savannah Slumberson in "The Grub-A-Blub Blub". However, the set character appearances occasionally led to an appearance deviation from how the character was described in the original story: the bullying Ginger Pie in "Knock Down Ginger" was described as a tall, overweight boy with pale skin and pale red hair, but his character model – the same one used for Ginger (no relation) in "The Chipper Chums Go Scrumping" (who was a boy implied to be very outdoorsy with his friends) – was a skinny boy with curly red hair. Loralilee's witch doctor cure in "Doctor Moribundus" was adapted out of the cartoon, replaced with the Squeam Screen caretaker's narration claiming that the cure was too disturbing to tell as the viewer is shown the outside her bedroom window, and Stinker's murder in "The Chipper Chums Goes Scrumping" is changed to becoming crippled.

The original four books in the series were adapted for the first four series (although some, such as "The Matchstick Girl", were never adapted) but the final two series featured new stories that would later appear in the Grizzly Tales: Cautionary Tales for Lovers of Squeam! books. The theme music was altered at this time with a completely different melody and a faster tempo than the one used at the beginning of the cartoon's run. The framing device with the caretaker and Spindleshanks disappeared and the end of the opening titles would cut to the projector being turned on. Like the first two series, series five and six were commissioned in bulk as a 26-episode deal.

In 2007, it was announced that ITV was planning to promote ITV4 more frequently, which led to numerous ITV programming being cancelled; Digital Spy and Broadcast revealed that Grizzly Tales for Gruesome Kids had not been offered a seventh series — despite its popularity — finishing in 2006. Michael Grade, the ITV chairman, explained that it did not make "commercial sense" to generously invest in a children's channel.

The CITV series was airing as reruns on Nickelodeon when Honeycomb Animation announced in 2011 that a new series would be aired on NickToons UK in May. This new programme would have a shortened, catchier name and be "reinvented for a modern audience with even more twisted, dark stories to delight children everywhere" but would remain to a formula similar to the newer book series, Grizzly Tales: Cautionary Tales for Lovers of Squeam!.

Other differences would be the location of the framing device, which was now at The Hot-Hell Darkness instead of the Squeam Screen cinema, and the animation: the hotel scenes were 3D animated and the stories were animated in 2D software. The cinema caretaker was now replaced by the re-invented books' The Night-Night Porter, his half-brother, who banishes horrible children to spend an eternity at his hotel. Nigel Planer, Elephant Productions (now named Little Brother Productions) and the crew returned for this series, and the show, although for a new generation, was as popular and successful as its predecessor.

This is a list of the cast that frequently appears in the two television adaptations.

In 2004, Grizzly TV was created: a sister company to represent the partnership between Honeycomb and Elephant/Little Brother.

For the CITV series:

For the Nickelodeon series:

All content from Kiddle encyclopedia articles (including the article images and facts) can be freely used under Attribution-ShareAlike license, unless stated otherwise. Cite this article:
Grizzly Tales for Gruesome Kids (TV series) Facts for Kids. Kiddle Encyclopedia.